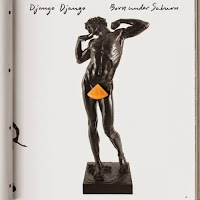 In the first days of this blog, Django Django's first album was reviewed in a positive way (read here: http://wonomagazine.blogspot.nl/2012/03/django-django-django-django.html). In fact, the album ended high in my personal top 10 for 2012. Since I have to admit the album sort of faded from memory. Coincidentally just a few weeks ago I wondered whether there would ever be a new album. Thinking of it proved enough, Here it is.

The cover is very much a symbol of the news of this week (i.e. when I started writing the review). Picasso's modern art record selling painting 'Women of Algiers' was sanitized for U.S. viewers by Fox News. Even cubistic breasts leave too much to the imagination of sensitive, American minds. And here comes Django Django with Born Under Saturn's cover! There are more comparisons between the famous painter and this band. See if you notice by reading on.

Musically the album starts where 'Django Django' left off. Pleasant alienation over danceable rhythms and heavenly melodies. More 'Women of Algiers' than classic Greek art statues. The mix of cubism and realism can be found on Born Under Saturn easily. If anything Django Django has perfected its craft. Über songsmiths at work, could have been an apt title for the album as well. Let's take 'Found You' as an example. This song could have been sung by anyone from The Hollies to Herman's Hermits. Underneath everything was torn away and reconstructed in ways that the 60s pop icons could never imagine in their wildest dreams (next to technically impossible to execute). Django Django presents us with parts heavenly melodies, totally abstraction and some weirdness on the side as well. The fun thing is it works! 'Found You' is so extremely beautiful.

One of my comments three years ago was that the band could have gotten more out of harmonies. I concluded that good was good enough for 'Djang Django'. Not so for Born Under Saturn' though as the band really set itself to work on harmonies. And succeeded. Singer Vincent Neff may do all the work himself here, but that's just fine.

'Giant' kicks Born Under Saturn off. This is a very conscious choice is my guess. The songs holds all that made the debut album so much fun, while at the same time combining all that makes this band: the 60s and the 80s all in one. There is one other influence that pushes itself in my face: Blur. Never my favourite, it took me quite some time to figure that one out. Just one snippet of a song kept creeping up and I still don't know what song it is, but Blur it is 100% certain. 'Giant' does all well and is followed by a whole bunch of great songs. 'Found You' may be the best song on this album. It would have been a hit for The Beach Boys, the Backstreet Boys and Robbie Williams, but Django Django deconstructed the golden tune and made it a Django Django song and that may just be too much for the average ears. Pure earcandy though. Born Under Saturn holds more songs like this. Pure pop under an estranging layer of experiments. Pop remains pop though. Although 'First Light' would not have been my first choice as a single though.

Towards the end the music on Born Under Saturn becomes a little bit more of the same. This prevents Born Under Saturn from being a perfect second album. It comes close though. Django Django managed to perfect its music in the past three years in a way that I still call it poppy and not arty. This music could go extremely wrong, for my ears, and doesn't for one moment. It is just a tat too uniform past song #9. For the rest Django Django is my kind of band. If the only Django I know personally develops himself as much as this band does, his debut for Ajax is not far away.

You can listen to 'First Light' here: