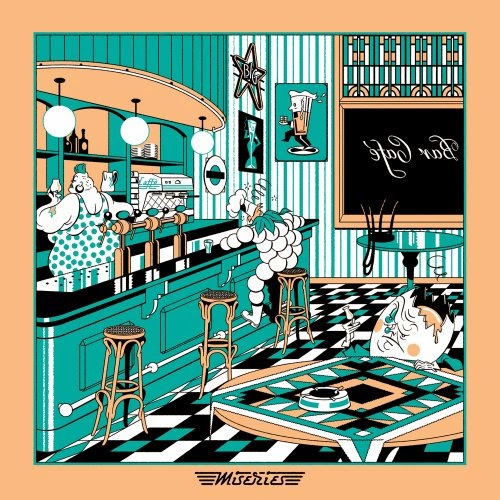 Strange things can happen. Paul McCartney composing an oratorio, Nigel Farage could welcome all non-British to the U.K. next year and advocate a prolonged U.K. E.U. membership. For all I care Geert Wilders turns muslim in 2017. The switch Tim Knol made from roots songs in a country Neil Young fashion to garage rocker would have been straight up there. Not any more. Tim Knol made that switch and The Miseries rock and not just a little.

Palio Superspeed Donkey reverberates through my mind all the time and I'm bursting out into several of their songs while listening to The Miseries. The songs on the album still need to get their own identity for me. At the same time this is tremendously fun. The Miseries play a whole lot of right notes on its debut album.

Tim Knol is joined by Kees Schaper on drums, Erik Lensink on bass and Melle Boersma on guitar. All but the significantly older Lensink used to play in a band in Hoorn, before Knol's breakthrough. Schaper is his long time drummer (and of many others), while Lensink has a recording studio the band used for all songs on this album. Together they formed a band that gave Knol the possibility to rock out in a punky way. And rock the band does.

The songs come by in one blur. A surge of energy grips me and simply doesn't let go. There is some variations. Especially on side two when the "ballad" 'Wiggle' comes by. Bee Gees like high raised voices in a fun song. The cover 'Sorrow' gets a The Miseries workover, i.e. twice as fast and over before you know it. The speed is phenomenal and is sped up live even more. I had a lame arm just from watching them play. (Read the review here: http://wonomagazine.blogspot.nl/2015/04/record-store-day-afterparty-gebr-de.html)

70s punk comes by in several songs. 'Backdoor' is a fun example of that. Short riff outburst, shrill live notes, a fast basis and a warped solo. Short sentences sung with a sneer. These guys know exactly what they're doing. 'Out of existence' indeed, jazzy bar piano ending and all. One has to listen extremely carefully to get that pun. From the opening riff of 'Cracking up' The Miseries kick in the pedal and go for it in an almost relentless way. That just leaves one thing to mention. The harmonies the three band members create together. Knol, Schaper and Lensink know what it takes. Vocal harmonies and the guitar ones. They are all spot on. Punk or not, melody is key here. It is this combination that makes The Miseries a success.

With the album in the home on vinyl it is going to play regularly in the coming days and weeks. As far as I'm concerned Tim Knol made a fantastic move. The Miseries rocks and is loud, fast and proud to lend the title of a fantastic rock and roll compilation box of the early 00s. Tim Knol loves punk/garage rock and lets the whole world know. Great record.

You can listen to 'Skintflint' here: