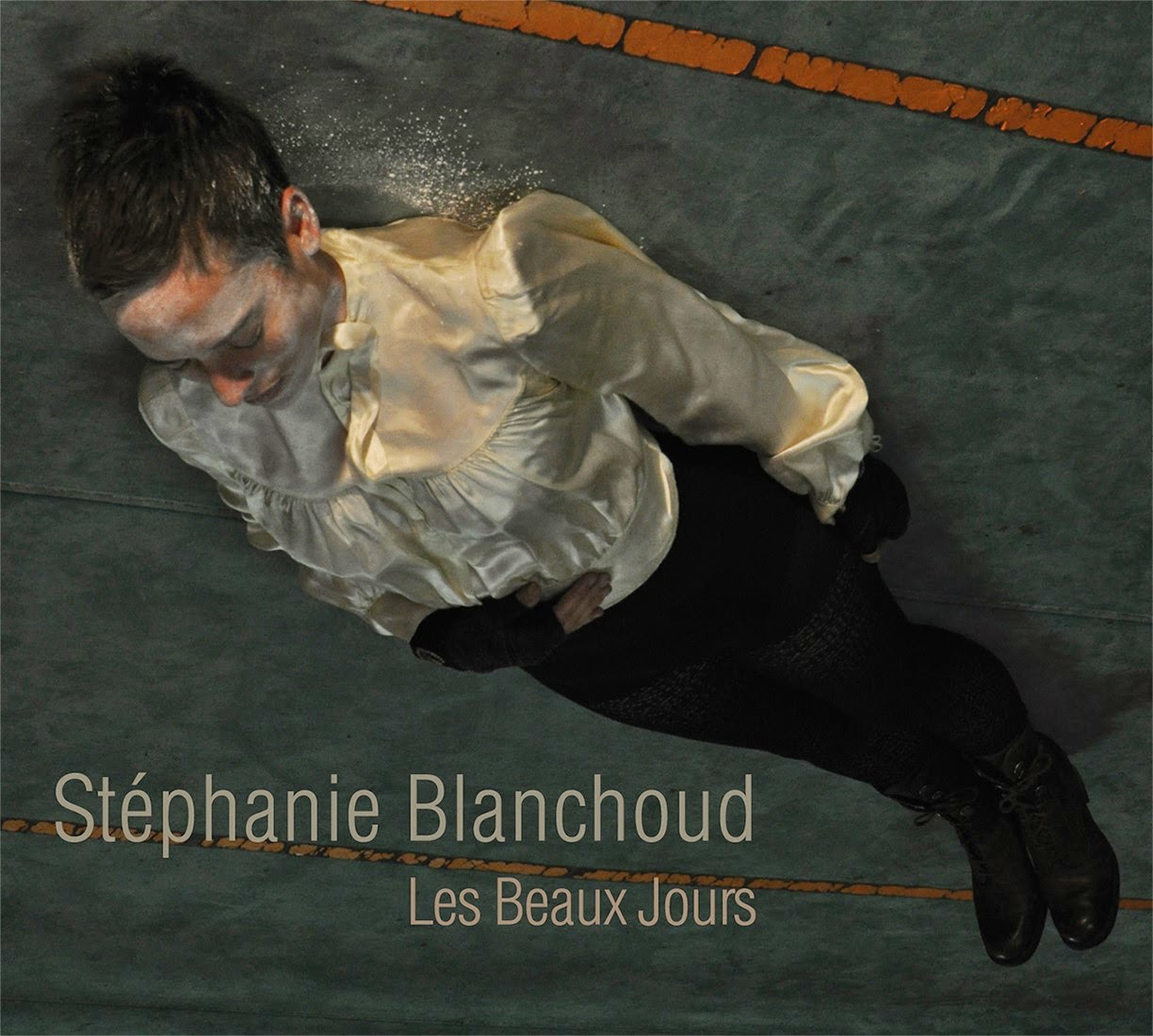 At first listen I put this album down. Not for me. Stéphanie Blanchoud sings softly, sort of purs like a cat contentedly on your lap. "Zuchtmeisje" we call French singers like this in NL, "Sighgirl". As sometimes happens with this sort of music, it sort of creeps up on me with each spin. Sometimes because of my iPod switching to random because it bumps into something, sometimes because I decide to listen again to give a record a second chance. Les Beaux Jours thus crept up on me.

Stéphanie Blanchoud is of Swiss decent, although she was born and lives in Brussels. After a career in acting, she switched to singing full time and released her first album in 2009. Les Beaux Jours was produced by Marcello Giuliani and all of a sudden there is a link with Sophie Hunger, who has featured on this blog before. And to be honest it was after hearing 'Supermoon', Sophie Hunger's latest album, that I seriously started listening to Ms. Blanchoud, without realising the link between the two.

What happened is that I started to discover the hidden depth of this album. Musically there is a lot more going on than I realised at my first, superficial listen. Stéphanie Blanchoud and Giuliani have created an atmosphere of mystery and a melancholy balancing between hope and despair.

My old French teachers Brother Lucas and Mr. Voeten did their utmost, but I didn't want to learn much at the time and certainly not this language. Too hard to memorise for me. I seriously tried later, but utter failed. Too bad, as I love hearing French nowadays, know some words, but not enough to understand what is going on in the songs of Stéphanie Blanchaud. That gives me even more opportunity to listen to the music and the melodies. And these are quite alright.

The songs all have a soft basis, songs that you can find all through the history of French chansons. With Edith Piaf, but also with more modern French singers like Zaz, Brigitte, Charlotte Birkin and het stepsister Lou Doillon. At the same time a link was established with the Anglo world, making Les Beaux Jours a beautiful hybrid. The sultry mood of the album is enlivened with an electric guitar and drums that come up higher in the mix, like in 'Tout au Bord du Monde', which gives the song more urgency than expected from the singing.

Blanchaud qualifies for Zuchtmeisje with a score of 100%. She sings in pleasant, breathy way. Always seemingly without power, letting the words and harmonies escape her mouth in an almost unintentional way. So modest. At the same time musically an environment is created around her that catches all that leaves her mouth and encapsulates it, comforts it and enriches it. The result is 12 beautiful songs. Some pretty straightforward, others with many a layer to discover in what is going on. That can lead to an almost rock song, 'Up and down'. Where the drums pick up the rhythm and all follows, voice and band. A great rock ending by the way. 'Mes Bonnes Manières' has the same trick. Chanson, rock and a warm sixties sounding organ go very well together here.

It is surprises like these that made Les Beaux Jours grow on me faster. Like Lou Doillon's album 'Places' (http://wonomagazine.blogspot.nl/2013/09/places-lou-doillon.html) did a few years back. In 'Décor' singer Daan joins Stéphanie Blanchoud in an French-English duet. In a few songs Blanchoud sings English too. Her main language is French and I don't mind. Life is well with her singing. Even in English, the soft 'All is fine' is a fine song.

The beautiful days, let's hope they lie ahead for Stéphanie Blanchoud. On the basis of this album that wish may just come true. The title is so well named, as all I can think of is a summer evening after work and all else is done. When just enjoying life is all there's left to do. Yes, Les Beaux Jours and I hit it off quite well in the end.

You can listen to 'Décor' here: