I'm in Your Mind Fuzz. King Gizzard & the Lizard Wizard 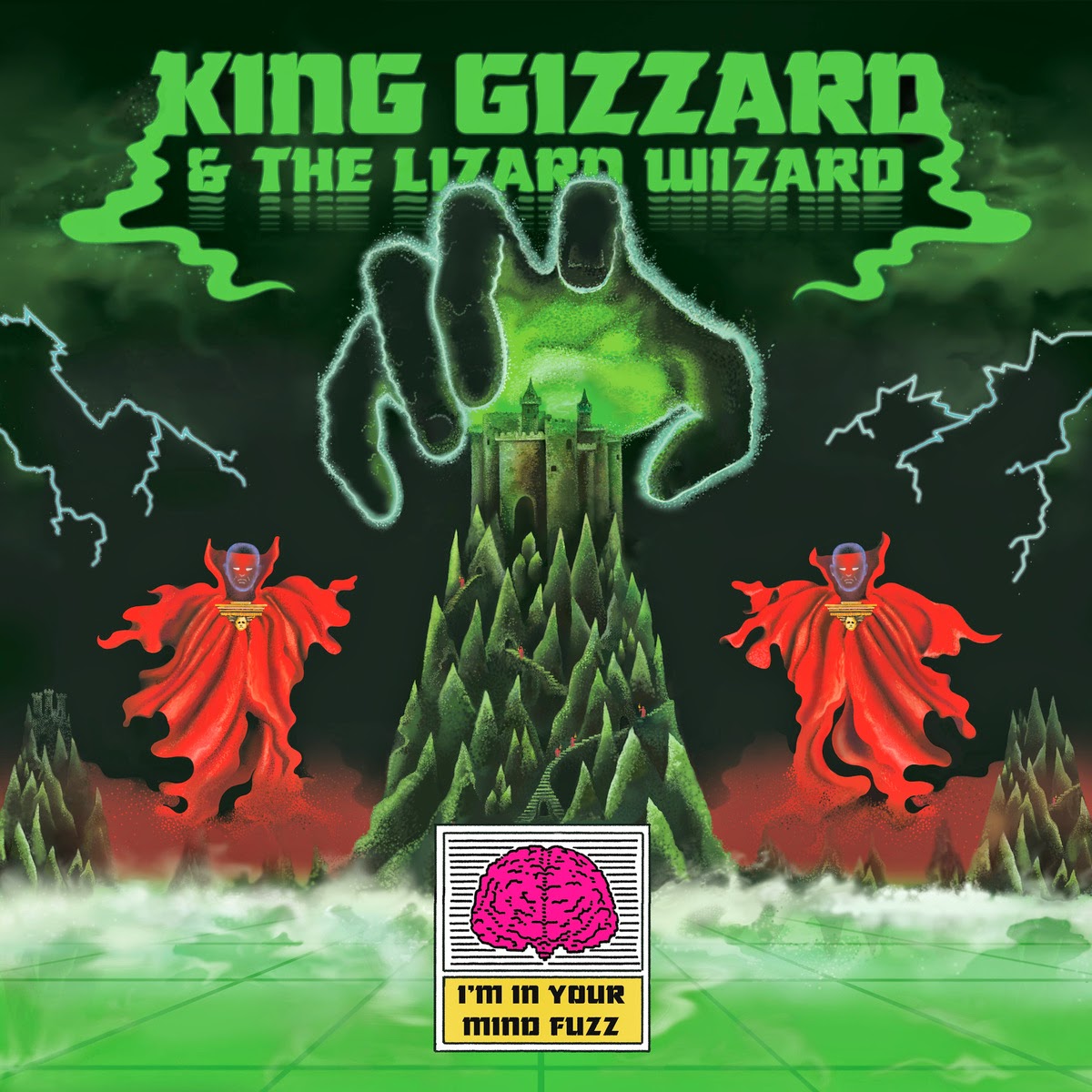 Let's examine the cover for a starter. Weird, strange, a bit repulsive even. It's all there and something resembling devils too. 2015 psychedelia? Perhaps. It doesn't have much to do with the second half of the 60s. The same sort of goes for King Gizzard's music. Without the 60s no I'm in your mind fuzz, but without surf guitars and new wave neither.

The long opening song or better the songs that sort of morph into each other at the start of the album remind me of that weirdest of weird albums that I have in my possession, 'For Demolition Of A Spiritual Framework' by Marble Sheep. Everything seems to be possible and wherever an idea takes the band the instruments will follow. King Gizzard certainly knows how this trick works in a successful way. A solid rock basis is strewn out over this floating, pulsing and tripping bed. Like an artwork I once saw in SMAK in Gent. Nothing but a floor filled with smaller and bigger rocks, the sort you find in riverbeds, until I noticed that the bed of rocks moved, like a wave and got totally fascinated by what first seemed nothing but a floor filled with rocks. This album has that effect on me. It's an interesting mix of psychedelic rock that is direct enough to grip me.

King Gizzard & the Lizard Wizard is a band from Melbourne in Australia. That makes two artists from Melbourne in a short period on this blog in a short while. The other being Courtney Barnett. I'm in Your Mind Fuzz is the band's third full length album, apart from a long line of singles and a compilation album. All in this decade. Production levels are high for this band.

What I like about this album is that the band manages to really work with different moods. The flute that was quite in vogue around 1970 rock has a trippy role in the fast paced 'Hot Water' that is speeding ahead like it has to win the local marathon, while the flute takes these interesting side steps and isn't interested in finishing at all. Pace is the common denominator for I'm in Your Mind Fuzz, like fuzz is an effect returning often on the music and singing. 'Am I in Heaven' is even faster and graced by a harmonica. Songs have these distinctions, which is exactly what attracts me to the album. The latter song is another in which Marble Sheep returns. The main difference being that King Gizzard masters his English, the Marble Sheep guy definitely did not. For the rest we are spaced out totally.

A comment could be that King Gizzard c.s. are not too original in its music. Well, I was surprised there a bit too to be honest. This band knows how to incorporate different influences and toss them into an interesting mix of styles. The mystical mood of the later Traffic is mixed with the earlier psychedelic incarnation of the band. A more modern way of playing a guitar is blended with psychedelia leading to a very listenable hybrid song. Just like the up tempo songs are varied with more reticent ones in which 70s jams with a guitar solo not unlike Frank Zappa's come out ('Her and I/Slow Jam #2').

I'm in Your Mind Fuzz is an album that intrigues and pleases at the same time. It winds me up and cools me down all within the space of one album. This will never be my favourite album, for that it is a bit on the weird side, but just like 'For Demolition Of A Spiritual Framework' I will come back to it in the future. Just a lot of fun.

You can listen to and buy 'I'm in Your Mind Fuzz' here on the band's Bandcamp site: