The Kinks Are the Village Green Preservation Society. The Kinks 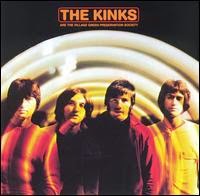 Back to the WoNo Magazine review series of albums that were released in 1968 or 1969. The angle now shifts from albums that Wo. only knew the single(s) of to albums that came with the hits that are in his position for years if not decades. The first one by a band that belongs to the best the 60s has to offer: The Kinks. Passed reviews range from Barry Ryan to Steppenwolf and America to The Cats.

In that first top 40 that I laid my hands on in early or mid October 1968 The Kinks were not present. It took a few weeks for that to be mended, when 'Starstruck' entered the lists at #29. A fun fact I learned form Wikipedia is that my home country was the only country where 'Starstruck' charted in the whole world. (And I have the single, second hand, this particular one.)

In hindsight it is clear that the band's streak of top 10 and higher hits was already over in 1968. With the exception of that one mega hit called 'Lola' in 1970. Ray Davies wanted to prove himself as an album artist and lost out on both accounts. For me the reason that most people seem to have forgotten The Kinks in 2015, instead of being a band that is in the same row with The Beatles and The Rolling Stones.

'Starstruck' is on the album with the incredibly long name 'The Kinks Are the Village Green Preservation Society'. The album provides a trip in U.K. nostalgia on things already (long) gone in 1968, let alone almost 50 years later. As far as I'm concerned the best The Kinks album of the 1960s and one of the best ever. Ray Davies managed to capture moods and nostalgia in a brilliant way in words and melodies that have proven to be timeless. Distancing himself completely from everything that was going on in swinging London he created a universe for himself and his band members that make "Village green" an utterly unique album. No psychedelia, no back to proto garage punk or Stones R&B. The Kinks takes its listeners back to the ultimate Sunny Afternoon and Waterloo Sunset. The England or U.K. of his parents and grand parents where people sat in the village green, boy and girl fall in love at the grocer's store and where lost boyhood friendships are reminisced. All sort of characters created and situations pictured by Ray Davies pass by in the way he is so incredibly good at. Is there a U.K. artists with as keen an eye as he in the second half of the 60s?

In hindsight I find it nearly impossible to understand that this album failed to chart and did not sell more that 100.000 copies world wide. There's not much this album does not hold, except loud rock. The intro of 'Do you remember Walter' lays down the whole fundamentals of Electric Light Orchestra sound e.g., perhaps with thanks to Nicky Hopkins, who claims to have played most of the keyboards on the album. Ray Davies seems not to agree here. The nostalgic outlook on things past is clear from the start of the album. The beautiful title song mentions every thing worth preserving. A tongue in cheek is hinted at in the melody, not the lyrics. There's beauty, not the perfect pop song, but sheer beauty. The second song with "Village green" in the title has that same beauty "from a long time ago", like Davies sings in 'Picture Book'. The song is near perfect, so terribly good. The harpsichord (sound) and the plucked violins give the song a classical sound, the la-la-la is as old as the road to Rome. Pure melancholy and nostalgia.

'Do You Remember Walter' is one of the true gems of this album by the way. This songs is a perfect pop song. One of the only songs with a moment where Dave Davies is allowed to unleash his lead guitar, even if it's only for a few moments. In the odd one out there's also a wicked guitar. 'Wicked Annabella', song by Dave Davies but written by Ray, is a psychedelic track, that just sounds nasty and is at odds with everything else on "Village green". 'The Phenomenal Cat' is pretty weird also of course, but does fit in better.

To come back to 'Starstruck'. This was not a single I was fond of at the young age I had then. It was not 'Mr. Pleasant' or 'Dandy', my two favourites of the day. Since I've come to appreciate the song. The melody just works, the mellotron gives it a 60s sound. One of the better tracks of the album. The world('s DJs) must have had broccoli in their ears late 1968.

If there's a point negative to be made then it is that where recording is concerned "Village Green" could have sounded better in 1968 than it does. The mono is, well, mono, the stereo version is just not as good The Beatles and The Stones sounded at that point in time. Perhaps the result of not being on the largest record label?

Does all this make "Village Green" a long, lost gem? No, the album can be bought in any decent record store, in several guises. What it may need, is just this little extra praise every once in a while to make sure that it comes up in the world just this little bit more. It is about half way in the list of best albums ever. This may be just a bit low. Just like the great The Kinks hits are in general too low or missing in NL's favourite Christmas to New Year's Eve past time called Top 2000. So let me invite you to join the The Kinks and Ray Davies Appreciation Society. It's not too late.

You can listen to 'Starstruck' here:

or buy "Village Green" on bol.com: