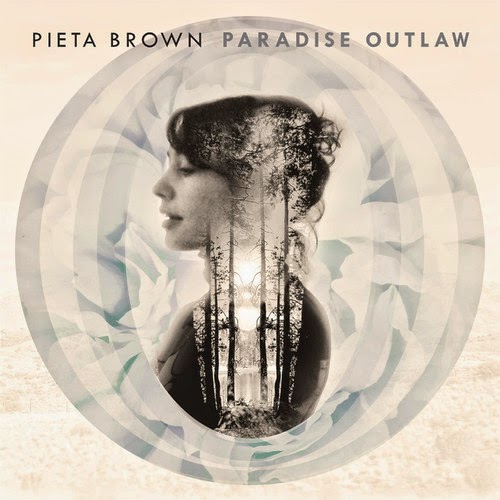 This is one of those records that remained on a pile of records to check out, got played regularly, but never made it to the blog. I decided to change that after transferring the record to my iPod, where it got played more regularly. The extremely pleasant to listen to voice of Pieta Brown caught my attention directly, so I started to listen more often and from one came the other.

Pieta Brown releases records since the beginning of this century. Paradise Outlaw is her 6th, excluding three EPs. Her music can be filed under alt.americana/folk/singer-songwriter corners of music. Even more laid back than J.J. Cale on a sunny afternoon. Pieta Brown is without any hurry on this album. She sits in the centre while behind her brushes are moving over the skin of a drum, a lazy banjo is picked in one corner, an electric guitar is just as lazy in the other corner. Pastoral is the right word her. The soundtrack for Marie-Antoinette and her ladies in waiting at play in the backgarden of Versailles.

The mood may darken a little, because of a dark slide guitar in a song like 'Before Gas and TV', this doesn't change the languorous mood. The heat is all around, humid, like a blanket speed is the last thing the musicians needed in these temperatures. How this all came about can be read on Pieta Brown's website. The record was recorded in Justin Vernon's (a.k.a. Bon Iver) studio April Base. Things came together there for Brown and her musicians. In 'Before Gas and TV' Pieta Brown comes close to the mood Neil Young created on some of his songs on 'Hawks and Doves' album, like in 'Captain Kennedy'.

Paradise Outlaw is a modest record. The sound is small and unobtrusive. With a minimum of effects Pieta Brown affects the listener directly. 'Opening song 'Wondering How' sets the mood for the complete record. Softly played acoustic and electric guitar, the latter with some reverb like effect on it, and brushed drums. A male voice singing very soft harmonies. I'm not even sure whether there's a bass present.

Strangely enough I have to play this album loud or put it on a headset. Either other form of listening just does not happen. The recording is so soft that it disappears in the life going on around me. I had to create the circumstances that Paradise Outlaws can force itself on me. Once that is created, the record draws me into itself.

The little extras are in the banjo that is added in one song, an electric solo, a violin, a duet. It is elements like these that make Paradise Outlaws the more interesting. Some songs sound deceptively simple, but listening to them more seriously makes me realise that they are simply prefect. A song doesn't need a million chords to be interesting. The contrast between Amos Lee's rougher voice and Brown's light one in 'Do You Know?' is one of these aspects.

All this makes Paradise Outlaw the perfect album to end a day with. A moment for introspection and relaxation. Pieta Brown delivers all that and more.

You can listen to 'Do you know?' here: