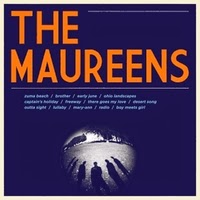 On 22 May The Maureens released the first single, 'Heartbreak' of its upcoming new album. To celebrate the release, WoNo Magazine looks back in time and gave a listen to the previous album. Here is our Wo.'s impression, but not before we tip 'Heartbreak'. Perfection it seems.

The best song I know titled 'Maureen' is by Fountains of Wayne. A track that the band inexplicably kept for its left over album. Why inexplicable? Simply because it's its best song bar 'Survival car'. Whether The Maureens named itself after that fabulous powerpop song I can't tell. That the name caught my attention has already been explained on this blog.

The live show The Maureens gave in Q-Bus, Leiden (read here: http://wonomagazine.blogspot.nl/2015/04/the-maureens-live-q-bus-leiden-10-04.html) was such a success that I've bought the LP since and indeed: we have another Dutch band in search of the perfect pop song. It is a pleasure listening to The Maureens. Johan is dead, long live The Maureens.

Influences of every band that aimed to do so, come by in one form or another. The Beach Boys, The Everly Brothers, The Beatles, Big Star, The Jayhawks (although more live than on (this?) record), 60s hit bands, all the way up to Teenage Fanclub, The Posies and Fountains of Wayne itself. It all can be found on The Maureens and more like e.g. the slightly louder guitardriven power pop of Weezer.

The Maureens is a six piece band from Utrecht. The two front men, Hendrik-Jan de Wolff and Bas van de Looy, sing the stars out of heaven, as we say in NL. Their voices intertwine, jump in and out of the melody and do everything that makes singing, well, a joy to listen to. Sometimes there's a third or fourth voice, lifting every song up. The band's songs make the sun come out any time of day and night, summer or winter. A quality Fountains of Wayne lost somewhere after its third album. The Maureens have found that power laying by the wayside somewhere, somehow. All the notes and chords are in that exact place that make my mouth curl into a smile, wrinkles show up at the edges of my eyes; lifting my mood: The power of a great popsong. The Maureens have found that well and is dipping deep.

The album is already a few years old. That has not kept me from writing. A new discovery well worth writing on. The LP is spinning away regularly on my record player. The Maureens starts with an instrumental song 'Zuma Beach'. A bit of a strange choice for a band focusing on melodies so much. It sets the tone of the album though. The same rays of light shine through as in the vocal songs. This is the great quality of the songs on The Maureens: They make me feel incredibly good.

'Brother' and 'Early June' have this quality, where everything seems to come together in the latter. An indie guitar riff and solo. The Johan like verses and the total über pop of the chorus. The warm organ that encapsulates everything going on.

Not all songs on The Maureens have the quality of 'Early June', but the ground rules of this song can be found in all the songs on the album. The band does not rest before the inner secrets of its composition is explored, dissected and rebuilt with all the melodies, harmonies and surprising additions in place. Hours of practice and bouncing ideas around will have gone into most of the songs., which did not make them lose their freshness. They still sound as fresh as the morning dew on the spring grass with the early morning sun shining down on it. The promise of a beautiful spring day.

Influences from the 60s are all over the place, in combination with the powerpop that is in vogue since the 90s. The vocals can be as laden as that of bands like The Flower Pot Men or The Herd, in combination with ooh and aahs that all bands from The Monkees to The Beatles could come up with. The guitars are quite modern in sound and approach, the keyboards take us back in time. Listen to 'Desert song' and all will become clear. The Maureens is a very irresistible record.

You can listen to 'Early June' here:

or the newby 'Heartbreak':

Or buy at Bol.com