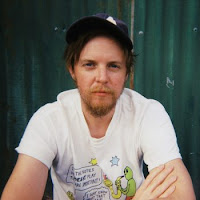 Daniel Trakell is a singer-songwriter from Melbourne in Australia. Put on his debut record and without a doubt you are remembering scores of soft-voiced singer-songwriters of the past 50 years or so. Let me start with mentioning CSN and individuals like Christopher Cross or from a later age Elliot Smith and Shane Alexander. Come 2020, Daniel Trakell. As far as I'm concerned he deserves a spot in that list. West Coast, Laurel Canyon transposed into Victoria. On top of that all, he has clearly heard the The Beatles ballads as well.

Warning Bell is an album that softly laps against the soft shore of your ears and brain. Ever so subtly caressing and encapsulating them until there's no escape possible. If you are susceptible to this soft version of singer-songwriters that is. Otherwise you'll have left long before that point. With a singer like Daniel Trakell there is hardly any middle ground.

His voice is soft, without much depth when he sings, not unlike Art Garfunkel holding back to support Paul Simon. The music all underscores this, although there may be minor eruptions as in the second part of the title track. Not more than a ripple on an otherwise tranquil record.

The basis of the album and its songs is Daniel Trakell's voice and acoustic guitar playing. Around them a song receives what it needs. Harmonies, all Trakell I'd say, becoming Crosby, Stills and Nash in one. Musically light percussion, a bass and electric guitar are part of all songs, but from there an organ, piano, trumpet or anything basically can become part of the sound. Most songs receive a distinct flavour because of the additions. Nearly all have a feature that springs forward during a song. The soft trickle of piano notes, the softly chugged snares of an electric guitar, gentle violins adding a different mood. You will find it all, every so delicate and beautiful on this album.

That is all nice, but it is the voice of Daniel Trakell that impresses me most. So soft and soothing. The songs come from that. Like I said, Warning Bell fits in a nice row of singer-songwriters with a feel for pop, that have gained attention and success. If Daniel Trakell manages to attract the first, the rest will follow soon. The album has the quality to do so.