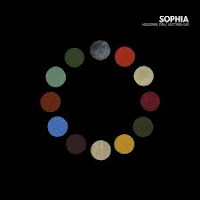 Sophia returns to these pages with its first album in the third decade of this century. Over one and a half decade since my introduction to the band. Musically not much seems to have changed for the band since then. Almost as if the world hasn't changed since either, despite the mirror, the devices in my hand and the state of world affairs, all screaming an urgent, different message to me.

Sophia is the band of Robin Proper-Sheppard with a band of musicians who he has gathered around him to record and perform his brain children with. Roughly they can be compartimentalised in three categories: up tempo stylish rockers, mid-tempo rockers and soft ballads. The punkish rockers present in the first half of the 00s have left the recording studio. At best the ghost of that punkish approach hangs over a song like 'Road Song'. It's bass underscored by the drums that has a wild noise but is nicely reigned in by an acoustic guitar and the singing. Sophia has become more sophisticated since those days. More balanced as well without losing its attraction for me. And then 'We See You (Taking Aim)' kicks in and there I am with my nice story on how everything is reigned in gracefully. This songs really, really rocks, folks! with some 80s synths hidden in there for good measure.

Holding On/Letting Go is an album that without the variation of the songs could come dangerously close to being boring. It escapes this qualification expertly, because of the way 'Road Song' is allowed to gracefully go off the rails at the end. Or, because of the way David Bowie's 'Blackstar''s saxophone sound is woven into ''. An original song, fully, with a very stylish sound that is extremely appealing. Sophia makes stylish music, slowly caressing its listeners only to totally rock the boat before we lull to sleep. The jolts work really well, extremely well, I can add for this album.

'As We Make Our Way (Unknown Harbours)' is four and a half years old now. I bought the album at the time and played it regularly since. Come 2020 I already dare to state that with Holding On/Letting Go Sophia has made a much better album. In fact, it may be contending for my favourite of the band to date. I'm not having ears enough to keep up with what is happening all in one go. This album will most likely grow on me to become even better over time. Simply because I cannot keep it all in at once. Because my first impressions seem to be inaccurate, despite several listening sessions, as you can read above. All that makes the album grow, my impressions change and my appreciation for the album become ever higher. It is number one on my list to buy for certain.

You can listen to and order Holding On/Letting Go here: