Dawn Of The Deaf. The Short Fuses 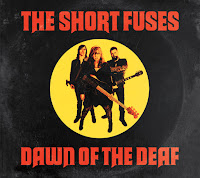 First single 'The Pink' was reviewed recently on this blog as one balled drop of energy being unleashed on me as unsuspecting listener (during that first session). What could a whole album bring? Believe it or not: one charged ball of energy. Is there too much of a good thing? Certainly, but not Dawn Of The Deaf. This album just rocks on and on with not a single dip to be found. If there is, it's me not being able to take more. Dawn Of The Deaf takes a lot out of a listener alright. This album is major party time and nothing else.

The Short Fuses is a trio, although I'd easily have believed it, should it say they have three guitarists all playing at full blast, releasing its first record in 15 years. For this comeback nothing has been left to chance and certainly not the song quality. The playing is absolutely super tight, while allowing for a truckload of melodic joy and mastery of each instrument. Jimmy Page on steroids guitar playing, solos like a whipping, fully energetic bass playing and drumming as if a forest needs felling, by way of drumsticks!

Over this all lays a voice like a fog horn. Miss Georgia Peach has the exact right voice for this music. Tough, loud, rough, a Debby Harry who can actually sing, a dark tone for a woman, but all melodic, despite the speed of the songs. Because songs they are. Highly charged punkrock songs with garage rock elements. Although there are hints to other bands, certainly of old, there seems nothing like The Short Fuses thanks to Miss Georgia Peach. And how she manages to keep that bass going while singing, is close to a mystery to me. It is a combination that works and seldom heard by me in this way.

Now Travis Ramin has an interesting role in the band. He's both the lead guitarist and the drummer. That poses a challenge on stage. Having seen the drummers of Half Moon Run and De Kift live, I'm about to believe a lot but not that this combination is feasible on stage. Fact is that at both instruments he is tremendously good, impressive even. Justin Staggs keeps the rhythm going on guitar in a super tight fashion.

The Short Fuses is nothing but a musical storm able to destroy anything in its path. Dawn Of The Deaf is a joy to listen to. (At the right moment. At 08.30 AM this morning it was not such a success, I'll admit.) Later in the day it works really, really well. The kind of album any lover of fast rock songs should get acquainted to, fast. As comebacks go, this is one dream of a comeback.

You can listen to and order Dawn Of The Deaf here: