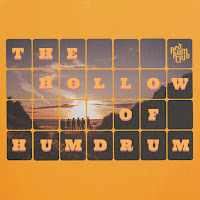 Who and what is Red Rum Club? The reason I ask this question is not to provide you with a direct answer, though I may get to that later. No it is to put focus on the way this band manages to incorporate Britpop of the years 1993 to 2010 and a little in such a successful way that I am under the impression that the best songwriters of the decade got together to start a band, including their powers of songwriting skills and inspiration from their respective hey days. The Hollow Of Humdrum in that sense is a near perfect album.

Enthusiasm, exuberance, force, joy, power all ooze out of this album. For those not getting the message, there's also something totally different going on. Red Rum Club sports a high-sounding, almost mariachi trumpet to lift up its songs in a way that I haven't heard since I fell for such a trumpet in the opening song of TMGS' 'Rivers And Coastlines: The Ride', 'Tell Everyone'. The trumpet has the same exuberant effect on me in the opening songs of The Hollow Of Humdrum. Here the trumpet even has the role of the lead guitar. That and more is what is on offer.

So what is Red Rum Club? A six person band from Liverpool that has absorbed all music coming through that city for the past half a century and more. It started as a five piece and was struggling to get attention, until a chance meeting with trumpet player Joe Corby, in, almost to good to be true, Liverpool's Cavern Club. Listening to his playing on The Hollow Of Humdrum, I can imagine his sound was the missing piece of the puzzle. The band released the album 'Matador' in 2019, that passed me by at the time, but is on my list of having to hear. Red Rum Club is supposed to be a force on stage. I can only take that on their word. As soon as it's safe again and the band comes over, be sure I will be there.

Manic Street Preachers, Kaiser Chiefs, Supergrass, just to name a few bands and imagine their, best, up tempo songs, fuelled to the brim with extra energy and then a trumpet going all out over these songs. This is what Red Rum Club offers the listeners. "It's time to move your feet", Fran Doran sings in 'Ballerino'. It seems to be main message on this album. There's no need to be a ballerino to move those feet. This party music takes care of automotion of the body. I love the way the rhythm simply pulses over and over, charging the mind into movement.

The surprise of the album is 'Favourite Record'. The mood goes down and Canadian band Half Moon Run comes into earshot. Red Rum Club shows that it is not afraid to play a slow, reflective song, including the line holding the album's title. 'Favourite Record' works.

What I will admit to, is that this level of energy is a bit much for a whole album. On the other hand a song like 'Dorado' brings such a huge smile to my face and I'm seven songs into the ten song album. Again the rhythm is so tight. Neil Dawson's drumming is high-powered and fierce. The basslines of Simon Hepworth are so much in sync that it's almost like Siamese twins are playing together. The two guitarists, Michael McDermott and Tom Williams provide the rest of the big sound 'Dorado' has. Over all this Corby's trumpet can do whatever it likes. And does, believe me.

The Hollow Of Humdrum is a perfect introduction to Red Rum Club. Looking back over time it has the same impact on me as 'Employment' by Kaiser Chiefs had on me in 2005. It is an excellent and charged album full of great songs with a second point of rest, 'Brando' at the right moment again. So there's nothing truly new going on here but the addition of that trumpet is simply stunning. (And do not forget to TMGS' excellent record from 2013.)

You can order The Hollow Of Humdrum here: