Kings Of The Valley. Kings of the Valley 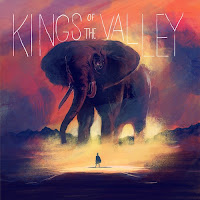 There is music that brings me back decades, immediately. Kings of the Valley plays that kind of music. Before I know it my mind is back in the 70s when I got to know bands like Deep Purple and Led Zeppelin. Kings of the Valley is closer to the former as an organ plays a role in the music on the band's eponymous mini album, consisting of five songs. But then, what is a mini album if only one songs clocks under five minutes and two over ten?

Kings Of The Valley is a band from Norway, a foursome, bass, drums, guitar, organ and can be placed in the same line as their countrymen Motorpsycho and Soup. Deep rock with proglike parts are interspersed with dreamy sequences suggesting a liking of West Coast pop and rock of the 70s with a little 60s psychedelia as a side dish. It makes a long song like 'The Golden Shore' extremely interesting. The dreamy vocal parts are drowned out by an up tempo instrumental rock melody where rock, Deep Purple meets prog, Focus. When next up an instrumental interlude takes the mood down completely again, I am pricking my ears up more and more. A lot is happening in 'The Golden Shore' and most of it is simply good. You are allowed to note that perhaps it is a bit too long, but when the music slowly rises once more discussions end there and then. Kings of the Valley must be familiar with Soup's latest record, 'Remedies', as in the build up there are some similarities.

Kings of the Valley is a band that makes music in 2020 but clearly has listened to the record collections of the members' parents, perhaps even grandparents. There's nothing modern about Kings Of The Valley and I'm not complaining. The album is varied. Competent riffs fly around, while psychedelia finds its way into the same song ('Living By Default'), while at the same time the melody is there.

What at times surprises me is that bands can still find a new riff that works. This band certainly has. So yes, in a way Kings Of The Valley is an anachronistic album, playing music from a time that is long, long gone. But just like Deep Purple releasing an extremely strong and good new album, 'Wooosh', in 2020, so this band that is new to me has. And for most of the world, is my guess. With only four previous songs on Spotify, this album can be seen as a presentation worthy of attention.

You can order Kings Of The Valley here: