The Great Dismal. Nothing 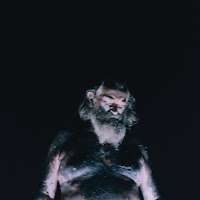 The Great Dismal is a kind of beast that I don't put on the blog regularly. The music is, on average, heavy, sludgy as if wading knee deep through the mud and I like it. So let's delve in a little.

First, who is Nothing?, as I had never heard of the band before. The U.S. band was formed in 2010, previously released three album since 2014 and consists of four members and knows a host of ex-members. Central in the band is Dominic Palermo. The Great Dismal is the band's fourth album and is a monument bringing Nothing into the third decade of the 21st century on a wall of guitars and heavy drumming.

This is not all. The first song on The Great Dismal, 'A Fabricated Life', is fully atypical. The kind of song I could find on Soup's, the Norwegian progrock band, albums. The kind of song or part of a song equalling the calm before the storm. 'A Fabricated Life' isn't a part of one song, yet what happens in 'Say Less' is in no way announced in the opening song. It is one side of Nothing, making the band varied and more interesting.

On the whole the band is not just a bunch of noisemakers. All the songs are highly melodic, Palermo's singing is always soft(ish) giving the songs light and life and keeps them away from just anger or frustration. This makes them all quite listenable and convincing where The Great Dismal is concerned. In fact, I love listening to the album as it simply contains a fully varied musical menu.

The album holds elements of (post)grunge, prog, hardrock and a dash of pop, loud pop, certainly, but pop none the same. The kind of songs I like to sing along to while bobbing my head up and down and shake my corona grown long hair. Yes, folks, seven months of not seeing my hairdresser does something to my looks and it goes quite well with The Great Dismal.

A song called Bernie Sanders? Why not. But allow me to focus on the music and not the potential politics. The guitars dive off the deep end with ease. Again it's only half of the story. Nothing, as nihilistic as it may sound, always leaves the curtain at least partly open. A lighter guitar provides the necessary lightness in all the dark sludge of the rhythm guitars. Palermo's voice simply can't go deep, so always allows light in, even when his tone hits the no feeling button. He may like to call his band Nothing, there simply is a lot on offer, despite the name, despite "paradise is somewhere else", like he sings in 'In Blueberry Memories'. And in the softer 'Blue Mecca' my thoughts return to Soup's album 'Remedies' immediately. especially with that synth filling the space in the music just fine, but also, believe it or not, The Beatles.

The Great Dismal aims for a great sound and a great impact. As such it reminds me of Para Lia's new album, 'Gone With The Flow'. Both deserve a lot of attention. Rock on, I'd say, I'm here to listen.

You can listen to and order The Great Dismal here: