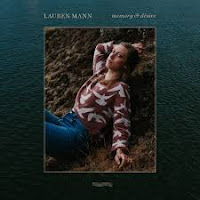 With two great new singles under her belt, Lauren Mann's new album Memory & Desire is a much anticipated album for me. Having listened to it now on a few occasions I can only state: mission accomplished by Lauren Mann. Memory & Desire is an album that is a joy to listen to and a step forward for the Canadian singer-songwriter.

My introduction to Lauren Mann went by way of an album that was posted for free on a website I used to frequent. With her band The Fairly Odd Folks, she made pleasant songs that were nicely varied. In hindsight, her previous album, 'Desire', seemed to miss something. Perhaps the best described as a loss in the joy of creating and playing music. If anything that joy is back on her new album.

The album's lyrics may focus on loss, the grief over that loss and a longing for change, the power of the music is fully felt. This is music lived through and passed on to anyone willing to listen to it. "Dear Forever", is one of the songs that show how deep the musical prowess of this album reaches for. Layer after layer of instruments are added, making the song more beautiful by the note. This is a song that deserves to be heard on a global level as it holds everything that makes the song of a good singer-songwriter. Melody, singing, fantastic arrangement, surprises, they all come by. As an aside, I keep hearing "tears forever", but then when a love is truly lasting it will bring tears to one's eyes regularly from sheer happiness and fond memories. The long and lasting emotions felt during the span of a lifetime. In that sense my ears match the title and theme of 'Dear Forever'.

What makes Memory & Desire so interesting, is that there is no predicting what comes next. Lauren Mann has stepped away from her first instrument of choice, the piano. Yes, there are piano songs and you may hear the instrument in the songs, but in several just as one of the others. In 'Missing You' the acoustic guitar is leading, in 'Waves' it is atmospheric keyboards and Lauren Mann overdubbing herself. I could have given a few other examples at that. It results in a so much more varied album, including several extremely pleasant surprises, giving the album a depth and mystery. An element that makes me want to listen again and again.

With Memory & Desire Lauren Mann moves up a league, while showing the potential to take on the top of present singer-songwriter and folk musicians. With her new album she has delivered an album containing an enormously consistent quality and one that I will be playing for a while. There will remain so much left to discover over the coming weeks and months. Simply because nothing is obvious in the ten new songs. The moods can change, like in the piano song 'Galaxies'. A darker mood rules where in another song sprightly ripples are released on the listener. Please go on and listen for yourself. It is time for you to learn about Lauren Mann's music.

You can listen to and order Memory & Desire here: