Gone With The Flow. Para Lia 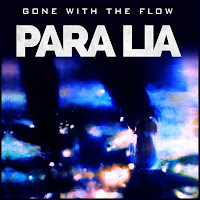 It was only last year this blog was introduced to Para Lia, the musical project from Cottbus in Germany, and already there is a full-length new album. René Methner and his wife Cindy are in a hurry to release new work and quite rightly so.

Gone With The Flow presents a tight form of rock music filled with songs to sing and shout along to. In other words: the kind I like. Para Lia in one way certainly is influenced by U.S. hard rock bands from the 80s. A big sound, a huge lead guitar, I don't know about the big hair and spandex, but that part seems the least important to me. What I, at least then as I haven't listened since, disliked about most bands is that they forgot about good songs or were to formalistic for my ears. Exceptions like 'Sweet Child Of Mine' excluded of course. Para Lia brings such elements as a good vocal melody, variation and lead guitar to its music. And here I am listening with great interest.

At the same time the band is not afraid to bring more modern electronics into its music. That can lay underneath the rock part and even overtly when Cindy Methner takes on lead vocal duties in 'Kassandra'. Don't worry rock-buffs, that stellar lead guitar with its floating sound returns soon enough in the song, making it explode in a beautiful way. It gives the album depth and variation.

Is there an instrument Rene Methner does not play? According to the information coming with the album I note: guitars, bassguitar, keys, vocals, baglamas (on Kassandra) and programming, next to writing all the songs and producing the album.The drums are programmed I notice, in a convincing way I might add.

The blog had already paid attention to the album's first single; 'Riders On The Dike'. I will suffice here with stating again how much I like it. Apart from the vocal melody, I love the mellotron sound in the song and the huge guitar playing over it all. It is a huge song but matches it in niceness. The kind of song I simply love a rock band to play.

On the album the mood is taken down immediately with the darkish ballad 'Fools'. Again a sign that Para Lia is far from a one dimensional rock band. This is a ballad with delicate sounds but also some strong eruptions and a cello part, played by Terry Wigmore. Giving something extra to the whole sound of the album. Again that variation that makes me like Gone With The Flow a little more. More points are being scored by the song.

Without any hesitation I can add that the same happens in the intro of 'Fire (My Chemical Imbalance)', with a guest role for Fady Haddad (and I forgot to mention the vocal duties of Amanda Kim Sanderson on 'Riders On The Dike').

It all brings me to the conclusion that Para Lia has set the right step in its two records old career. The band convinces me from the first note to the last one, something 'Soap Bubble Dreams' did not as a whole. That was a nice album with songs shooting towards very good. Gone With The Flow is good to very good. An album that many lovers of melodic rock ought to find their way to.

You can listen to and order Gone With The Flow here: