I'm Not The One! The Lemon Drop Gang 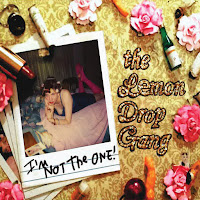 "Guwey, guwey, guwey"? I don't even know how to write it, but not since "Chewy, Chewy, Chewy', a late 1960s hit of the The Ohio Express, have I heard three words having to do with chewing so pronounced in a song as in 'Bubblegum', the most exiting song on The Lemon Drop Gang's album. The kind of song that captures the energy from long ago, played and recorded with all that modern life allows for. There's more. The "yummy yummy yummy" phrase of course is the title of an earlier hit of The Ohio Express. To underline it all: a "bubblegum band". Where things do not align is in the music itself. 'Bubblegum' is so much better than the two hits of the band of old. (That was still active in the 2010s to my surprise.)

The Lemon Drop Gang debuted with the single 'Georgie' on this blog and returns here with its first album. It is an album full of nostalgia for 60s pop hits played in a late 70s punky way. The way The Ramones sped up The Beach Boys and surf hits and Blondie played Buddy Holly's hits from the 50s and other songs then circa 15 years old. Anyone who was attracted to those songs will find their way with I'm Not The One!. 'Georgie' made some sort of a promise to me and I can share with you already that the promise has been fulfilled.

The nostalgia sounding through the songs on this album are in part etched with a sense of innocence that belies the age of The Lemon Drop Gang's members. Like most Rum Bar Records' acts they are second or even more chancers. Musical enthusiasts that make music because they have to, as an extremely serious hobby. That is in part how I'm Not The One! sounds. The Lemon Drop Gang isn't the best band in the world. After I recognised this fact though, it is time to judge what is on offer. From this moment on things become very easy for me. This music is the kind that I could listen to all day, because it makes me feel good and puts a smile on my face.

From the very start in 'Hit The Wall', the speed is up and a fiery guitar solo stokes up the excitement. If the band is able to keep this up I'm Not The One! is going to be great fun. The nice thing is that the album allows for more variation than I would have expected. There's even a sort of 'Sunday Girl' ballad to be found in the form of 'You'll Come Running'.

The only comment I can make is that the band makes singer Steph O'Halloran work hard at times because in some songs she has to sing in a slightly too low register. I have heard the complaint from personal experience from the singer in my band that sometimes it is hard for a woman to sing songs written by a man. In the songs that are better aligned to her vocal range, it is clear she can put a lot more into the song, making a difference instantly. For the rest Steph O'Halloran is able to rock and take care of the early 60s innocent pop feel all in one. A great combination it is.

I'm Not The One! is an album that has a few faces and I notice that each turn the band takes is welcome. Right up to the very end when the band really rocks out once again with the great 'Time To Myself'. Two great pillars of rock prop up the album as a whole at the beginning and end. With two songs like that an album just can't go wrong and it doesn't. I'm Not The One! is great fun.

You can order and listen to I'm Not The One! here: