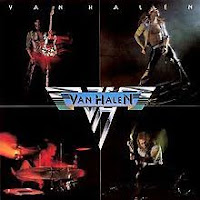 It was literally a few days ago that I heard a new band play on the radio and I said to my girlfriend: "They are still trying to sound like Eddie van Halen". Not in a very appreciative kind of way, as I never was fan of the band Van Halen. At the same time I wondered how things were, as I hadn't heard for years anything from Eddie nor the band. I faintly remembered there being problems with his hips that prevented him from playing, but that was years ago. Any Van Halen comeback tour would gross millions upon millions in the U.S. , so what was preventing them?

It turned out this morning that Eddie van Halen was severely ill for some time and had passed away at the age of 65.

Of course Van Halen was a great guitarist, there's no denying that. The number of guitarists emulating his style is a list without end. However, what made the band Van Halen special for The Netherlands, had nothing to do with the music. It was that the brothers Alex and Eddie were born in Amsterdam in The Netherlands. Despite having emigrated in 1962 to Pasedena that made the band a little bit Dutch for us Dutchies. Something that even in the short news item this morning on the radio was stressed once again.

For me the band entered my life when I heard their cover version of 'You Really Got Me' on the radio, I think winter 1978. I still have a copy of it and I think it is the only Van Halen record in my collection. Of course this is a The Kinks song from 1964 spiced Van Halen style. At the time 'You Really Got Me' did not have the status it has in 2020. Other The Kinks songs were played on the radio at the time. Nowadays it is often that proto-punk style song and its twin, 'All Day And All Of The Night', I tend to hear most. And even every once in a while the Van Halen cover.

What followed simply wasn't my kind of music. I wasn't even a guitarist yet myself. The band's big hit here was 'Running With The Devil', maybe two years after it's release. Why then, I don't know, it probably, finally, got airplay then. The other most popular song was when Eddie van Halen had moved into synthesizers. 'Jump' was only a minor hit, but can still be heard regularly on the radio. My personal favourite is from when Sammie Hagar had become singer in the band, 'Why Can't This be Love'. That driving rhythm works for me. Today I'd say that 'Jump' seems to have become Van Halen's most popular song here.

Oddly enough, he may be most famous for a solo many people may not be aware that he plays it. 'Beat It', one of Michael Jackson's biggest hits, is adorned with a blistering guitar solo, totally out of sync with Jackson's disco and yet it works. Eddie van Halen at his best.

Eddie van Halen has not made a lot of music I care to listen to, except for the occasional, coincidental encounter, but I do admire his guitar playing. Seeing 'Eruption' being played is a true feat of technique, effects, and sound to marvel at.