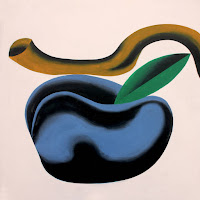 Sometimes a band comes out of nowhere, to me, and arrives into my life at completely the right moment. For some reason the songs and melodies play the right tune for me. This happened with Plum, the new album of the band Widowspeak. Nothing much seems to happen, the voice of the singer seems to softly whine on and on, without a lot of expression, while I was pulled into Plum deeper and deeper. Usually music like Widowspeak's has the opposite effect on me. Plum certainly did not.

As Widowspeak is a totally new band to me and thus to this blog, let's take a step back first and share some general information. The band was formed in 2010 in Tacoma, Washington by Molly Hamilton and Michael Stasiak. Together with Robert Earl Thomas they started working on its first album, released in 2011. Four albums and nine years down the line Stasiak is no longer in the band, that is now based in Brooklyn. As all previous albums have passed me by, I have no way of telling how Plum fits in the development of the band. What I do know is that it is an album that is warm in feeling, yet distanced.

This is a paradoxic remark, I realise, but describes how the album reaches me. The singing of Molly Hamilton distances itself from the listener, as she mostly searches for the lower ranges of her voice. Almost moving towards whispering the lyrics. This does not allow for deep emotions to be expressed. On the other side there is this longing that drifts through her singing most of the time, giving it the warmth. The music around her is always under control. The sound is warm, yet also somewhat detached.

What the music on Plum certainly is, is beautiful. The dreamy quality takes me along on a musical ride. It is the kind of music that envelopes and caresses. Indeed, that warmth I wrote about previously. The drums always plays softly in the background. The rhythm is firm but without force. This music needs a subtle approach and this drummer, James Jano, delivers that. Willy Muse's bass is plopping away. Tum, tum-tum and adds a little melodic line between chords here and there. The two guitars play either elementary parts or intricate melodies bouncing off one another. Just listen to how 'Even True Love' plays out. Or how the bass takes the lead in 'Amy'. Creating the space the song needs before a keyboard and guitar take over for the chorus.

With Plum Widowspeak has made a beautiful dreampop album with an atmosphere that speaks volumes. The subtle changes in the music and instruments are enough to keep me enraptured while listening to the album. At times these moments of introduction can be so nice.

You can listen to and order Plum here: