After the Great Storm. Ane Brun 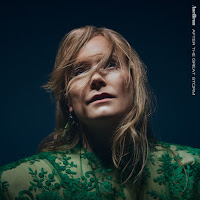 Ane Brun's music never made much of an impression on me. Hence I was highly surprised when her new album, one of two to be released in a month's time, immediately did.

After The Great Storm is a modern affair at that as well. Subtle electronics and rhythms have found their way into the songs on the album. Long drawn synth chords lay a subtle foundation while the rhythm drives the songs onwards. Little bleeps and blobs meander through the mid-tempo songs giving the listener something to do and probably detect months after the first introduction when another detail suddenly reaches the ear. From there I detect a more traditional piano, but wide apart and only a few notes. In opening song 'Honey' Ane Brun makes a statement of an electronic sort alright, warning all listeners for what is to come.

With the electronic carpet all around her, all Ane Brun has to do is deliver her vocals. With her rather high voice she is the centre piece of this album. No matter what she achieved together with the producers and musicians, it is her voice that is in control. After The Great Storm is Ms. Brun's album alright. There's simply no doubt about it. Her voice (and the harmonies) are so central. Mixed right up front it is her voice that dominates the mood of the album.

Take the title, and second song of the album. The music meanders, the electronic sound seems to turn around itself, over and over and over. I literally can imagine a vortex sucking me down. Is Ane Brun the siren calling me to and over the edge or the guardian steering me away? I can't make up my mind. At one point she is the former and then the latter. The vortex keeps turning and calling, five minutes long. 'After The Great Storm' is at much song as it is an experience.

Should you need any explanation as to why I was captured by After The Great Storm, there you have it. It is such an intriguing album. To remain with the title song, musically there is so much going on. The addition of the orchestra adds so much to the sound and experience of the song. I am fully and totally enraptured.

Both After The Great Storm and the to be released 'How Beauty Holds The Hand Of Sorrow' were written after a period of being unable to write songs because of a family tragedy, in one big surge of energy in a remote cabin in Norway's mountains. It took three weeks only. Back in Sweden where she lives, together with several producers and musicians she set out to change the songs into the songs as they are heard on the albums. Originally meant as a double album, the sets were split and to be released shortly after each other.

The first instalment shows that Ane Brun made the right decision. After The Great Storm is an impressive album containing so many different moods. From extremely serious to a song with a childish quality like 'Crumbs'. Not because of the children singing with her, but because of the childish enthusiasm caught in the music.

With After The Great Storm Ane Brun surprised me and it is always nice to be surprised in a positive way. This is an album that will most likely grow for a while as it has so many layers to get to know and digest. I am very much looking forward to the next album and instead of two or more years it will only take two weeks from now.

You can listen to and order After The Great Storm here: