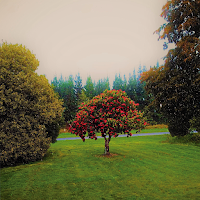 The Bats are around for close to 40 years and released its 10th album last week. The previous one from 2017, 'The Deep Set', was the first to find its way to the pages of WoNoBlog. The Flying Nun newsletter is a great source when you want to know what is being released in the furthest inhabitable Down Under, for us living in close proximity to the original Zeeland. Several records have found their into my home that way. Foothills is the most recent.

It is not because Foothills so extremely exhilarating. Far from even. It has everything to do with the pop feel in the medium tempoed indie rock of The Bats and the interactions in the harmonies between Robert Scott and Kaye Woodward. A slowly ageing voice and a clear female voice that interact in a beautiful way. And yes, there's some REM in the music, as I can imagine Michael Stipe and Mike Mills singing a song like 'As You Were' together.

There are days that listening to good and honest songs is enough and listening to Foothills delivers that experience. In 'Smaller Pieces' a mandolin joins the sound, while a high sounding organ hovers in the back of the mix, both giving the song this little extra and changing the sound of the album in a minimal way, resulting in more depth and warmth.

The more I listen to Foothills the more I notice the details on and arrangements of the album. The Bats have made sure that different sounds and instruments find their way into the different songs. Resulting in a nice variation in the sound. It makes Foothills an album of subtle differences as the songs and tempo of the songs are not extremely varied. The album is fairly one-sided in that sense. The voice of Robert Scott does not assist here, as it is clearly, and I do not have another word for it, reaches the end of its career.

Because of the variation in sounds and instruments Foothills becomes the album very much worthwhile to hear. The high lead guitar in the opening song 'Trade In Silence', the already mentioned mandolin, the dark keyboard sound towards the end of the album, the up tempo rhythm of single 'Warwick', are just some examples of what The Bats is capable of in making a song interesting to listen to.

So, Foothills may not be an exciting album, it more than convinces me. Two listening sessions were enough to convince me to purchase the album and listened with ever more joy since. I'm casting you off, reader, as it is time for you to click on that link beneath this piece of writing and go and listen yourself.

You can listen to and buy Foothills here: