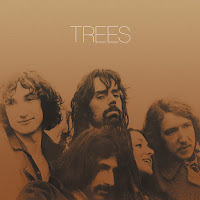 To celebrate the 50th anniversary of the release of Trees' first album 'The Garden Of Jane Delawney', Earth Records releases a four cd package containing the band's first two album and two discs with outtakes and live versions. Having listened to the set, for the first time in my life, I'd might add, this re-release is totally justified, if not exciting.

Trees was formed in 1969 in East Anglia by David Costa and Barry Clarke. They met with Bias Boshell and Unwin Brown. The band was complete when it found a singer in Celia Humpris. Only a year later the band was able to release its first album, mostly written by Boshell. Later e.g. he wrote 'I've Got The Music In Me', Kiki Dee's most exciting and enduring song, to join the Moody Blues after Patrick Moraz left the band. The other songs are traditionals adapted to the band's liking.

The easy way to define Trees' music is to dub it British folk, like so many bands played at the time, led by Fairport Convention and its singer Sandy Denny. Humpris certainly fits that mould in her way of singing. Trees' music though ranges from the traditional to wilder outings. Listening to Trees for the first time, I thought I heard the first incarnation of Mike Oldfield, as the style of lead guitar playing certainly can be heard on 'Tubular Bells' e.g., next to obvious nods to Jorma Kaukonen's playing in the folk style and even rock songs of Jefferson Airplane.

'The Garden of Jane Delawney' is a more traditional album that rather sticks to the British folk tradition. It seems; until Trees shows it was not afraid to pass round the hash pipe every once in a while. Celia Humphris' singing get this dreamier quality, while San Francisco style guitar playing is allowed in as well. In the 7 minute plus 'Lady Margaret' lead guitarist Barry Clarke really lets it rip, before the intricate acoustic work of David Costa can come through again. How a traditional folk song can explode is no longer a question for me as of today. It has been answered successfully by Trees. This folk gets blended with rock and some psychedelia alright. The British answer to Jefferson Airplane? I wouldn't go that far, but certainly a great hybrid of two worlds creating a little universe of its own. 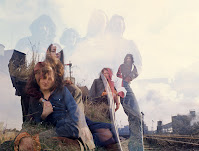 The result is that I'm fully intrigued by Trees. Unlike its contemporaries, where after a few songs I've had enough -something that has not changed since my introduction to British folk in the mid 70s- with Trees the next song is welcome again and again. The band allows itself to experiment. In the studio, I guess, the band knew what to go for, but in the rehearsal room many things had been tried out for sure. Listen e.g. to 'Glasgerion'. Humphris' is singing quite frantically, Bushell's bass guitar is all over the place and the guitarists battle it out, with Bushell's bass close on their heels.

I do not have the time to talk you through the whole collection and will stop with the first cd, the original debut album. To me it is a true discovery of an album and a band that fully deserves that attention. Of course the music is fully a contemporary work. That conclusion does not forgo on my noticing of the quality. This is quite stunning to be honest. Trees manages to surprise me several times on this album. The last band doing this in the folk genre and wide beyond was my introduction to the album work of Jefferson Airplane in 1978. I can't imagine Trees getting this standard in my life, simply because I'm no longer a teenager. It doesn't make me less pleased with this discovery.

You can listen to and order Trees here: