It's that time of the month again and our Wo. is running behind on his monthly dose of Kairos once again. While .No is actively promoting the November Kairos, Wo. is finally getting round to the August edition. Is it as if he's trying to escape his daily spoon of cod liver oil, like in this youth? No, rest assured, dear reader, we do not force our writers into anything. So, let us sit down, relax, and see what musical adventures .No presented to us in the August 2020 edition of Kairos. If you click on the link below to settle and listen, you can follow, slowly but surely, what the presented music did to (the mind of) our Wo..

The familiar intro morphs into a piano, added to by a harp. I was just about to write, not a piano again, doing my own take on the Rosella savoury rice TV add in Australia in 1977,to be distracted by the harp and later on a violin. This is a sad melody, containing a load of emotion. The violin as it were is speaking to me. I have no clue what I'm listening to, nor where it is from or how old it is. Looking it up, the composition is Astor Piazzolla's 'L'Histoire Du Tango: Café 1930', played by Larissa Groeneveld & Gwyneth Wentink. And here I sit having always thought a tango was played with an accordion. Also I associate a tango with a different rhythm, but then what do I know about tango's? What I do notice is that this is music able to move me and touch me. Like I said, that violin speaks to people and thus me. There may not be a singer, a lyric, I can almost grasp what is being said to me. 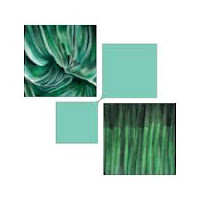 Okay? Trickling water? A cold wind? Birdsong? What is this? Spring? Glaciers melting? The sound of the last snow scooter riding on/gliding down the slope reaches my ear as well as a giant wasp or mosquito. Irritating and loud, almost drowning out all else. Irritating it is. The composition is called 'Brook' from someone/something called Med Gen.. Help!, I notice I have to pay attention for 17 minutes plus. The sound of a bow being pulled over strings is repeated over and over. Dark, slowed down?, male voices sing wordless sounds over the bowed sounds. Listening intently with eyes closed I hear the looped instruments and the echo of the voice adding to the primary sound. After a while the singing fades out and the basic track of the brook returns. Slowly a second part builds itself up around a female voice, I think and perhaps slowed down as well. Musically a whole swarm of mosquitoes is unleashed into my ears. Closing my eyes I feel myself slowly losing consciousness. As a meditation 'Brook' certainly functions well. Unless I'd fall asleep, so I open my eyes when noticing to slip away. Come to think of it, at a campsite next to a brook, I wouldn't fall asleep in a hundred years because of the sound of trickling water beside my tent and no other sound present any more. The mind closes in on the sound of water, focusing, keeping my brain focused and awake. A scene from my life and certainly familiar to you, whether a brook or the sound of a mosquito or something else in that silence of night.

It is only now that I notice that the brook is a sound through which .No has mixed other compositions. First it was 'Cradle' by Lyra Pamuk. From circa 18 minutes onwards it is a song in a language that I do not understand. Not a single word. 'Be'ya Sa'di' by Anna Homler and Alessio Capovilla. There's a low drone, like a highway in the background, over which traditional instruments are played and Anna Homler sings in the language I'm not familiar with. When the brook returns, the song is slowly faded out. The birds have gone to bed. I hear the sound of the wind coming through the music, but notice that it comes from outside my room, real wind.

Over the brook a piano plays. The return of Eleni Era to Kairos and the blog. Her high voice meanders over the slowly played piano chords and notes, while electronic sounds hover in the background as a Poltergeist in that movie of old hovering behind a tv screen or wall. Eleni Era sings 'Beautiful Moon' in her mother tongue, Greek. Once again I'm struck by the beauty of her music. I have written it a few times before but now I'm going to act. Tonight 'Rise Love' will sound in the living room and not remain solely on my external hard drive. 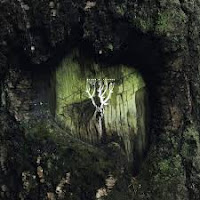 The slow moving song is swept away by another droning sound. Louder sounds move in and out like a wave on the beach. Med Gen. is allowed to return with another minute long contribution, 'Harbingers Of The Storm'. Somewhere behind the electronic sounds Thor can be heard, doing his thing in the distance, rolling like a crashing wave through the air. The lighting in the distance I can imagine myself easily. Med Gen. does capture the oncoming storm musically in sound. In that sense it is well done. The tension of not knowing how bad the storm will be comes through alright. So well done, but why would I want to listen to this in my spare time? That is a question I cannot answer in a positive way. The rain sets in. The storm has reached me. Slowly, I'm musically soaked to the bone, have no place to hide under and I find myself wishing it was over, fast.

And it is, a keyboard,a piano and a plopping, slow bass guitar enter my ears. I have the idea I should know what it is I'm listening to but can't get my finger around it. Let's take a peak. But of course, Nick Cave and the Bad Seeds. .No has taken a shine to 'Ghosteen', Cave's latest album. So have I, but also have learned that 'Ghosteen' is not an album to play every day. Very likely because the album is Cave's elegy for his ghost teen, his son that will never get beyond 15, having died from falling of a cliff near Brighton. In 'Hollywood' all is atmosphere with Nick Cave singing over the atmospheric sounds that he's waiting for "his time to come", "for peace to come". In a way this is 2019 church music. The "aah aah aah" is completely sacral in a totally modern way. It is the movement of deepest feelings, whether with a religious intent or not. In the second part of the song a rhythm is started like an old steam engine train. Slowly going forward, gathering speed while chugging away. Not that 'Hollywood' accelerates, it is the suggestion of gathering speed that is sufficient. Nick Cave is on a run down California's Pacific coast, fleeing from demons and memories. There's nothing punk or rock and roll left in 'Hollywood', nor in the rest of 'Ghosteen' at that. With this album Nick Cave has sublimated his musical travails of the 2010s. It is the bass guitar that in part 3 presents a last eruption of things that once were. It is in this part that the exorcism takes place towards "piece of mind". His voice higher, totally different from his usual baritone. Of course I cannot know what Nick Cave meant with this lyric in his deepest, inner self, can only give you my interpretation, which I have. To my ears 'Hollywood' and 'Ghosteen' is an impressive tour de force by one of the greatest artists of this moment.

Next up is an even higher voice. The kind one can hear sing in a church. The accompaniment is bare, almost non existent. A few single notes here and there on an acoustic guitar, perhaps harp, perhaps plucked violin. It is this final option that, if forced, I'd choose. A violin comes in for a solo. Notes that can deeply move, like the opening song of this Kairos does as well. It is the style of singing that my ears highly object to. I just can't help it. Even when I hear that the quality of singing is truly good, my ears can barely stand it. But again, 'Nana: Duérmete, Niño, Duerme' is a beautiful composition as a whole. 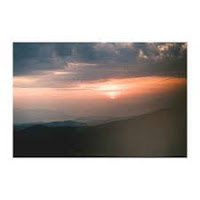 What's next? The pan flute from "Who Pays The Ferry Man'? No, this is far more serious. A few notes, at times cascading over an atmospheric repeat of the cascading notes, turning into another round of cascading sounds through the ever newly created loops of loops. Funny, but it does deserve some sort of closure, which is does not really.

Slowly the loops do fade away to be replaced by a serious piece of music. An orchestra playing extremely serious music that on the other hand could be part of a movie. It is not hard to be touched by the downcast mood. I suppose .No made this Kairos in the weeks of July when the beautiful spring had all of a sudden left The Netherlands to be replaced by wind and rain and less warmth. Otherwise I cannot explain the overall downcast music of this Kairos. Listening to it in early November, still thinking every once in a while: "where did my summer go"?, I totally get the mood though in these fast shortening days.

Kairos ends with another sound of the Highland Spokesman who replaced the sad sounding  'Motet From After the Rain'.

You can listen to this Kairos here on Concertzender: