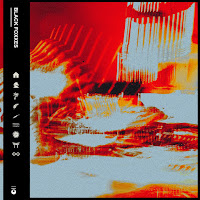 You can only make a first impression once, is a warning often heard and as such true. Only in situations where you are allowed or able to make a second impression the first one can be altered or mended, when necessary. So, the opening number of an album is an incredible important song, especially in the case of a new album.

Having never heard of Black Foxxes I found myself wondering what to expect. Where a first impression is concerned Black Foxxes certainly is familiar with the saying. 'I Am' made a profound impression on me. The song has a fantastic build up to a great, loudly screamed, and played climax.

This story only goes for those with a love for alternative rock and even emo I'd say, that I'm not such a fan of generally speaking. The emotions are flying around in 'I Am'. It is an electric guitar starting the song with an elementary, soft played sequence. Next up is a singer who joins without making a huge impression, except with a nice vocal melody. The guitar sound and the singing go up, a pounding drummer joins in as well. It all drops away, only to explode within a few seconds. Total chaos, except for the tightly pounding drummer. Impression made alright and ready for more.

That more comes in the form of a deep, dark guitar riff. 'Badlands' is another great song taking a full 8.30 minutes. Memories of mid 80s The Cult fly through my room. Memories of dancing to 'She Sells Sanctuary' and 'Rain' race through my mind. Badlands is at least this exciting a song. The main difference is the slight hint at madness tracing through the voice of singer (and guitarist) Mark Holley. As a guitarist he is well familiar with Billy Duffy's chops.

Black Foxxes isn't a new band. 'Black Foxxes' is its third full length album. In a sense 'Black Foxxes' is a new album by a new band. The two other founding members left the band early this year leaving only Mark Holley as original member. For me this is of no consequence. It's all new to me and I simply like what I'm hearing.

One of the songs pre-released is the single 'Swim'. It shows a totally other side to Black Foxxes, as the mood it presents in 'Swim' reminds me of Canadian band Half Moon Run. The half-tempoed pop with a soft feel 'Swim' holds could have been on any of Half Moon Run's three albums, until Holley can't contain himself any longer and lets his guitar dive of the cliff neck first, allowing for an exciting ending to 'Swim'.

What 'Swim' does, is show successfully how diverse Black Foxxes is. Where this diversity at first confused me while listening more superficially, it now tells me the band made the right decisions. Continuing like 'I Am' and 'Badlands' exhausts any listener at some point. By opening the sound up and allowing more melody and restraint in, the album grows and grows. Something the album will keep doing for some time I am convinced at this point. There's just more and more to discover, like the trumpet in 'Jungle Skies' or the extra layers of guitar, heavily distorted being added, as if sparks fly off the amplifier. Beware though of the moments of total chaos and sheer musical madness. Don't let them distract you from what is a great album.

The conclusion after several listens can only be that I've another great record added to my collection and that 2020 is slowly turning into an exceptional year in rock music.