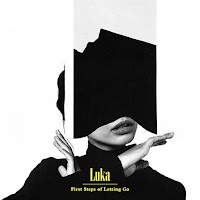 When the people at Snowstar Records wrote to me asking if I was going to do something with First Steps Of Letting Go just before the release date three weeks ago, I answered "I don't know, because I don't know what to make of the album". In a way that's still the case, but I also find myself playing the album regularly. So, let's try and explain what Luka's music does to me.

This spring Luka debuted (on this blog) with a single she wrote with Yori Swart called 'Tiptoe'. A song that is fairly easy to like but also a kind of modern song that is on the edge of what I appreciate in music. That's only normal, as Luka, at least primarily I would think, does not make music for men getting on in life, like I undeniably am in 2020. So, she makes music for the 20s, modern rhythms, modern sounds and songs.

Except that when I listen to First Steps Of Letting Go it is also clear that this is not the whole story. Most likely this other part is the reason I return to the album. Luka has listened to enough music that may have been in her parents' music collection to spice her music with instruments and sounds that are easier for me to like.

What I also definitely like is the atmosphere of First Steps Of Letting Go. This is positive, open, with a clear view of what she wants to convey musically to her listeners. There's simply no easy points being scored like I hear every once in a while when my girlfriend listens to the radio and a modern hit comes by. I know I sound like my dear, late dad, when I write it all sounds the same to me, except that I can make a clear distinction between what is good and average (or worse). Luka is not in that easy pop league. Her music is much more serious and demands listening. Which I found I don't mind doing.

This results in some confusion on my side as I hear music I usually simply do not like, that I like listening to. And I can't really explain why. Hence, the comment about not knowing what to do with this album. The fact that I can't really tell whether this album is good (or even extremely good, like Erwin Zijleman wrote on his blog), adds to the confusion. And then I hear 'Without U'. The mysterious atmosphere and sounds clearly get me. Luka is singing in a great way. It is here that I hear the 'Rhiannon', 'Sara', Fleetwood Mac / Stevie Nicks influences from her parents' collection e.g., despite the song being far more modern.

In the second half of the album Luka let's her more rocking side out. Totally her own sort of rocking, but the guitar is rocking in 'Nocturnal Animals'. (Wasn't that a movie title?) and 'First Steps'. It only adds to my confusion.

With your reviewer confused, it is time for you to go out there and form your own opinion. What I do want to share with you that First Steps Of Letting Go is worth the effort. Perhaps it's also a lesson for me and that I have taken those first steps already.

You can listen and order First Steps Of Letting Go here: