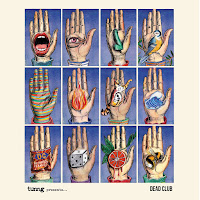 Where the mood is concerned this album is aptly titled. Dead Club? The cover art is rather hilarious for a club of Death. Musically the album is not extremely exhilarating. Also, it reminds me of a band I've heard before but can't get my head around. It is in the singing as well as the music. At least in the first song. It took me a while but found it: Elbow.

The spoken word in the opening song, 'Eating The Dead' gives rise to pause. What is death? Whether it is truly "nothing to us", is up for discussion I'd say. Death is all about the grief one feels having lost loved ones and the missing of them. One's own death is another matter. I will not go into that, as this review is about Tunng's album and not death as such. The lyrics and spoken word do return to, if not are all about the topic, so thinking about death does become unavoidable while listening repeatedly to Tunng Presents ... Dead Club.

Reading the Bandcamp page of the album, I find that the album is a part of a concept including a podcast (listen here: smarturl.it/deadclubpod) and the spoken word contributions of Max Porter. It centres on the different ways death is dealt with in different part of the world, the eating for example in the title of the first song, cleaning up after death in Sweden, but also the struggle how to deal with death in the modern world getting more and more devoid of religion is touched upon. To learn how to deal with it in a new context.

I can't possibly write that musically a lot happens on the album. For that it is to downcast and elementary. Tunng creates a mood on the album that at best can be called mildly uplifting, at best. Of course this fits in rather well with the topic of choice. Within that concept a lot happens that is extremely interesting to listen to. Dead Club is musically extremely strong and varied in a constrained way. Like the constraint a virtuous organ player in church knows and within that is able to find every extra note that shows his virtuosity.

I write this because several of the songs on Dead Club can be interpreted as church songs for the non-believers. Within these songs there's room for beautiful notes, "a box of old dildo's", strange percussive sounds, an extra instrument or two playing a nice extra melody. In these modest ways the songs get substance and body. The reason to return to them in the future, the odd topic notwithstanding.

With Dead Club Tunng has created an old-fashioned concept album, around the topic of death and dying. Not an everyday topic in music and a topic avoided as much as possible in every day life. Looking at it from another angle: death is the only certainty every living being is meted out when born. Where other creatures may not have the intelligence to contemplate dying, humans have been given the ability to live as if there is no death lying ahead of us. That quality is not going to be changed by this album. Death is the moment between being and not being. Only on Discworld, Terry Pratchett's master creation, souls have this brief moment of surprise, anger or wonder, at the other side.

With Tunng Presents ... Dead Club, the band presents a beautiful album that is extremely worthwhile getting to know and to get to know better too. A lot happens, despite or perhaps because it is so serious. Nothing has been left to chance to make this project a success.

You can listen to and order Tunng Presents ... Dead Club here: