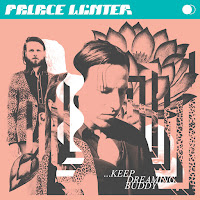 The first time I played ...Keep Dreaming, Buddy, I knew straight away that I would write about the album. The second time, I doubted my own ears, as I didn't hear anything that stood out. The third time I heard all these beautiful melodies. The fourth time ... In short it took me a while to form an opinion, before finally deciding that ...Keep Dreaming, Buddy must be an album that truly reflects the mood I'm in.

Having played Palace Winter's album enough times since my introduction to its album, I understand that the album's opening is very deceptive. The slow moving, electronic and moody song is not fully representative for what's to come. Palace Winter is a hybrid of modern rhythms and sounds, quality pop and some rock edges to go. It's not so strange that the time of the day, my mood or whatever stresses what I hear first or notice most. It clearly decides my reflection on the album.

Palace Winter is a Danish - Australian duo, not a combination that is usual but in a globally connected world nearly all is possible. With a love for spacious music and long drawn notes the music gets a distinct mood that reflects in the songs itself. The music receives the time it needs to develop and grow, like a old-fashioned, slow movie that takes its time to tell a story, depending on strong acting and not special effects and speed.

A good examples is 'Top Of The Hill'. I'm reminded of the way a song like 'Kelly Watch The Stars' by Air develops, but then with true singers, including a singer called Lowly. There's simply no hurry to let the song play itself out. As such the song can stand as an exemplar of Palace Music's songs. The basis is electronics, with a strong pop feel. Underneath that electronic carpet of sounds you will find an acoustic guitar, an electric guitar and regular keyboards, like a piano playing a solo. When a saxophone joins '1996', I can't but think of David Bowie when he returned from his outings in electronic dance music in the mid-90s.

On ...Keep Dreaming, Buddy Palace Winter aims for perfect pop songs and comes a long way in approaching that goal. In the meantime I may be swung about a little here and there, depending on my mood, but I have made up my mind that this album is extremely nice to have. Even if I switch it off every other time or so. On all other days I enjoy an intro and rocking track like 'Won't Be Long'. ...Keep On Dreaming has found its way into my life.

You can order and listen to ...Keep Dreaming, Buddy here: