The Noise You Make Is Silent. Klangstof 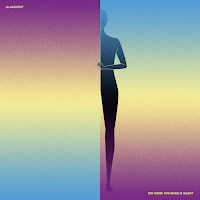 There are days that the review of the cover art of an album should suffice. A cover that is reason enough to buy an LP. The Noise You Make Is Silent holds one of those covers. The combination of colours, the way the yellow leaks into all else except for the human shape, the way the colours are mirrored on the two halfs of the front cover is simply beautiful and intriguing, This is not an art blog or I may have had the voice to keep op writing, which I cannot. Also I do not at this point in time have the information on the artist who created the artwork. My compliments none the less.

My introduction to Klangstof was an unwitting one. It was the support act of Alt-J I never caught the name of at the time. It's first album was reviewed on this blog but did not leave a lasting impression. At this point in time I certainly cannot guarantee The Noise You Make Is Silent will though.

Klangstof leans heavily on modern sounds that may go out of style quite soon, like some dance tracks that become almost unlistenable as they have become outdated. Dance is certainly a large influence on this album. Digital rhythms, bleeps and blops come out of programmed synths. The melodies and atmosphere in general are dark and murky. Pet Shop Boys without the tongue in cheek.

Those able to listen between the atmosphere will find enough to enjoy. Songs that are delightfully build up from extremely small and delicate to thundering anthems. On the other end of the spectrum it is the melodies hidden away in a song primarily driven by beats that steel the show for me. It is moments like this that surprise me and make The Noise You Make Is Silent enjoyable to listen to for me.

Klangstof has not made this album without other artists in mind. Fans of Radiohead will certainly recognise a little of their band as can those of Sparklehorse. Like with both bands that shone first in the 90s there is a balance between humans and the machine. Cyborg music just entered my head as a thought. Music that a machine cannot compose but humans cannot produce in an organic, analogue way.

Koen van der Wardt also has some digital assistance for his singing, a clear Thom Yorke influence in some songs as well, the ultimate vulnerability when singing. So all in all there is enough to get intrigued by. Enough to want to get to know better and find out whether this album is really worthwhile. Something I simply cannot tell after a few listening sessions. This takes time. I remember saying this about 'Kid A', there was no WoNo Magazine to write in in the year 2000, only to never put it on again. The Noise You Make Is Silent is different. There are more than enough songs to listen to and not all estranging experiments.

So at best this review is an intermediate one. Where it will go, I have no way of telling. That The Noise You Make Is Silent is worth investing in I am sure of already. What does not need convincing is the single 'Blank Page'. With ease the best song on the record. A song in which the whole Klangstof album seems to come together as an executive summary.

You can listen to and buy The Noise You Make Is Silent here: