Father Of All Motherfuckers.Green Day 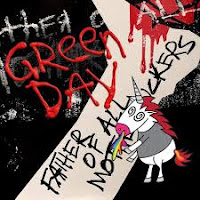 Sorry, folks, Father Of All Motherfuckers, the title notwithstanding, is just a fun new Green Day album. 26 Years after 'Dookie' and breakthrough song 'Basket Case', the punkrockers are still a relevant band that can write, arrange and play a great punkrock song.

2020 Means that all three members have become middle aged men, undoubtedly husbands and fathers but most likely also millionaires with a rather different job than most people working from 9 to 5. Age has nothing to do with being relevant. On this album there's nothing extremely stirring or genre bending. The surprise of 'Dookie' and the double surprise of 'American Idiot' lies far behind of us. Enter Father Of All Motherfuckers. A short, but biting album, full of melodic punkrock songs.

So there's a million things that anyone could write about or better against this album and the band and I have seen several that do. But why?, I ask. This album is simply fun. It has several great, short and pointy songs on it that rock, in all the right ways. Father Of All Motherfuckers holds staccato songs, melodic songs with well thought out parts and even a little experimentation. What does a person want more? Green Day fans ought to be well pleased. I know that I am. This album holds all what I expect from the band.

Right from the start the title song sparks. This level of urgency is not found in all songs, granted, but you won't hear me complain. Just listen how 'Fire, Ready. Aim' goes in. The sharp little organ gives the song an extra bite. Billie Jo sings with a deeper voice. It works, period. 'Oh Yeah!' takes the foot of the gas a little, nods a hat to Gary Glitter's first hits from 1972 in the drumming sequence. (Speaking about listening and appreciating music and detaching it from the person.) By the time I reach 'Meet Me On The Roof', a nice, poppy, rocking song, I know that this album is good (enough). 'Stab You In The Heart' runs off a long way with a 'Hippy Hippy Shake' and 'Let's Have A Party' guitar run, in one go, but is one of my favourite songs on the album.

Green Day may not longer have the power to surprise, but with Father Of All Motherfuckers the band consolidates its career professionally and artistically. Even punkrock bands can grow older gracefully.