Was It A Dream. Darlyn 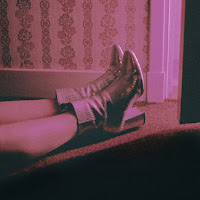 My girlfriend could have posed for the cover art. A small woman with high-heeled boots, "buy me some centimetres" she calls it. That aside, the name of what in my mind was a female solo singer, Darlyn, put me on the wrong foot entirely. Darlyn, darling, made me think of slick R&B and there's a lot on Was It A Dream, but not slick R&B.

In fact I was pleasantly surprised. Although my first thoughts went out to singer and all out rock bitch Anouk, I just as easily could let that thought go and settle into Was It A Dream in its own right.

Darlyn is not a solo singer but an Amsterdam based band, fronted by singer Diwa Meijman. The band caught the attention of the media with its first two singles, the first being a cover of the 1980's number one hit cover version by Tiffany of 1960s Tommy James and the Shondell's 'I Think Were Alone Now'. For me the least interesting song on Was It A Dream to be honest. The song is brought totally holding back from the 80s exuberance of the teenage girl full of expectation. I will not go as far as the "I" in the song is in the same room as Harvey Weinstein or Roger Aisles, but it doesn't sound like the "I" is enjoying the alone part. So it is an intriguing version. Perhaps I will have to reconsider my earlier impression some day.

It is in most other songs Darlyn makes an impression with songs that hold the balance between the nostalgic surfpop of Donna Blue and the rock of Anouk in a light form. Which somehow results in a band (ex?) like Alabama Shakes. So a mysterious song 'Wasteland' settles itself on the album. Filled with emptiness, atmosphere and anxiety for that emptiness. The singing, the playing it is all sort of hesitant as if the point of no return has been reached but everything in front of the band is totally undesirable to even contemplate discovering.

It is 'Downside Of Love' that brings me the Anouk Alabama Shakes mix. Meijman does not have the power of an Anouk or Brittany Howard, but has a more womanlike voice, making the album sound prettier and pleasanter. A mix that really works on this album and with the band. The five behind her manage to play totally functionally. There's no a note too much on Was It A Dream is my impression. It results in an album that holds a lot of atmosphere. Often dreamy, without becoming vague or psychedelic. More like a daydream taking the dreamer to a nicer place for a few seconds or more. It even makes me feel o.k. with the Tame Impala synth sound I'm hearing on the album.

This makes this album a nice one to play. All music takes its listener to another place. Darlyn to a dreamy place where all seems to be good. As compensation there's a more solid song like 'Ten Dollar Smile', with its fierce guitar riff. Even here the basic rule of Darlyn is in place: not a note too many. As if 'Zeeuws Meisje' was in control. A nice detail is the tambourine on the hi-hat in the chorus.

Again it proves a good idea to play a record first and than look whether preconceptions are true. Because of it I am listening to a fun album. Darlyn is a nice addition to my record collection.

You can listen to and buy Was It A Dream here: