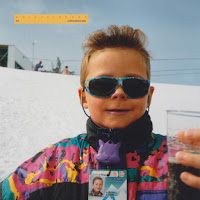 When young, I was told to never point a finger. Now I'm older it seems I need a reminder, as I received an album with that title in my mail somewhere late last year. The cd turned out to hold a nice amount of fairly cheerful alternative rock music by a band with a weird name, The Guru Guru. A band I had never heard of before. With a name that made me expect music of a totally different nature. So time to check it out it was.

The titles of the first few songs are all mysterious. 'Mache', 'Chramer', 'Ex Alexander', 'Know No'. All titles that pose questions not expectations, let alone answers. The music is sort of the same. Those expecting songs that easily flow onwards, will be in for a surprise. A band that certainly comes to mind is Field Music, but also, and maybe more surprising, Genesis and Marillion. The Guru Guru is an alternative rock band far removed from the sympho/prog rockers of old and older. It some of the changes in a song like 'Ex Alexander' that bring me to the comparison, even when the song moves towards metal in the Therapy? at the time of 'Troublegum' style. All over that it has what I call a typical Belgian element, what for a lack of better words I call a quality to displease in a musical sense by not choosing the notes that would please most, but somehow often do anyway.

So who is The Guru Guru? The band started as a school exam project that led to the release of two singles, followed by debut album 'PCHEW' in 2017. Singer, two guitars, bass, drums. A fairly traditional line up for all I'm hearing on Point Fingers. A song does not seem to be a finished product with The Guru Guru before many angles have been explored, different tempos exchanged and perhaps dozens of ideas tried and discarded. The result is songs that please, surprise and "scare".

Point Fingers is an album with several faces. The Guru Guru loves to rock, is fantastic in playing with dynamics within a song anytime it wants to. Delicate interplay between a guitar and bass like in the end of 'Know No'. It is not afraid of going against the grain and likes to sooth with a fantastic melody. In both sides the band is pretty good. Over it all lies the slightly sneering voice of Tom Adriaenssens. The lead guitars can battle it out in unison or play beautiful and tremendously fast melodic lead lines. The bass and drums are immensely present, as if there's a battle in need of winning and as loud and fast as possible. The two rhythm players in the band provide The Guru Guru with a fantastic background. The drummer is all over the place and the bass knows a deep end not afraid moving to the foreground with a nice lead line on bass here and there. This band is much more hardrock almost metal than Soulwax ever was on its first two albums, but the influence is there.

In the very first seconds Point Fingers puts the listeners on a wrong foot with the ever slowing electronic sound. Before the album shows its real face. This album is where another school project band might have winded up had they continued. The Fudge is sorely missed, but with The Guru Guru I have found my more than adequate and pleasing replacement.

You can listen to and buy Point Fingers here: