U Kin B The Sun. Frazey Ford 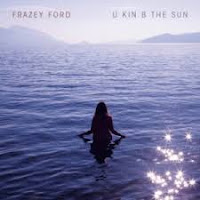 If anything Frazey Ford manages to hit the right note all over U Kin B The Sun. Anyone in the mood for an album that catches laidbackness in all its glory is recommended to go out and buy this album without bothering to listen first. They do not come much better than this.

Ha, I cheated. The above words closed my review of 'Indian Ocean', just under five years ago. They are so appropriate that I just copied them to start my review of U Kin B The Sun. Without to much trouble I could have copied the whole review and just changed some titles.

You might say that five years of silence is followed only by more of the same. You might, but I suggest you read on any way. Frazey Ford has released another record that is simple such a pleasure to listen to. With her rather harsh sounding voice a world of joy is created with songs that just seem to go forward until all that beautiful little details come forward that is.

Such a detail can be a beautiful change of melody or a little contribution on an instrument able to play some sort of lead line. From bass to Hammond B3 and guitar, they all play their own role. They all shine together, despite being hired to make Frazey Ford shine, they all get their moment to bask in the slight.

The music Frazey Ford excels in is a mix of soulful rhythm & blues. Music that can be heard in records from the 60s onwards, think 'Dusty In Memphis' to name another Caucasian female singer. The horns are missing, U Kin Be The Sun is more elementary in sound. Making it more subtle. On the other hand there's no 'Son Of A Preacher Man' in sight on this album. But that is a league extraordinaire. At the same time Ford regularly hints at some country elements giving her new album some extra depth.

It is the laidback nature of U Kin B The Sun that makes it shine. The kind of album that makes me ready to just listen, to want to do nothing else and just follow every little twist Frazey Ford and her musicians present to me. Following the music is more than enough for a short while.

The basis for the album was laid with her bass player Darren Parris and drummer Leon Power. Jamming in the studio led to the birth of several songs. Together with producer John Raham, Craig McCaul on guitar and Phil Cook's keyboards, the songs were flashed out to what we can hear today. It is a lot. From mellow laidback songs to unexpected bites. U Kin B The Sun is quite the album. 2020, the year starts so nice.

You can listen to and buy U Kin B The Sun here: