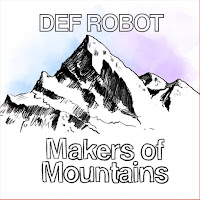 The cover of this album immediately reminds me of that photo of the human lint of people waiting to reach the top of the Himalayas recently. A photo that I thought to have been shopped for fun. No, it was reality and it told me once again that we are reaching the limits of what this world is able to sustain. Makers of mountains indeed.

So is the album of Def Robot an analogy for all of this? No, far from. The band has produced an album that searches for pleasant points of view in all things alternative and indie rock without being a nuisance to my ears in any way. In fact regularly Def Robot seems to be doing a lot of things just right.

If the bio is to be believed Def Robot's Paul Taylor and David Hancox only got together at the beginning of this year and started working on songs together. Written, recorded, produced, mixed and mastered all by the duo itself. DIY indeed. The two have worked together in three other bands before collaborating as Def Robot, so they're not exactly strangers to one another. In the sound there isn't much left to be desired, so job well done.

That sound is not one with a light touch or a happy outlook on life. The sound is simply dark, the singing serious. That sound was inspired by 90s indie rock according to Taylor and Hancox. I can go along with that, but also can point to the 60s pop feel in the singing in 'Sweet And Sour'. Like e.g. 'The Letter' of The Box Tops and even some Tamla/Motown like The Four Tops. There is more to find for those who care to listen. The 90s may be the foundation, it is also the starting point for other influences to be woven into the fabric of Makers Of Mountains.

Def Robot is not afraid of taking the mood down. The already mentioned 'Sweet And Sour' and certainly in 'Fortune Cookie Writer', a short sweet song with a distorted voice to give at a little eeriness. And an interesting topic to say the least. On those moments I am reminded of Indian Askin. This band also plays in different ways with the listener's mood. The change to 'Ferman Saved My Life (Cut!)' is something Indian Askin is not afraid of presenting as well. The slide guitar takes the listener in a totally different direction and lifts the album to another level.

It is in moments like this that Makers Of Mountains grows. Def Robot is exploring many sides to indie rock. Although some songs are more interesting than others, as a whole the album works totally. There's time for reflection and time to rock without much need for anything else. 'Gordon from Gordon' ought to satisfy indie rock guitar aficionado's instantly. Including a little madness along the way. Just another angle to Def Robot.

The conclusion is simple but justified. Makers Of Mountains is a good record, so all views from this specific top are recommended and come without health nor environmental issues.

You can buy Makers Of Mountains here: