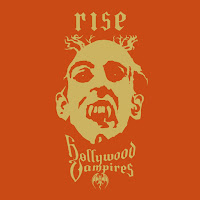 The cover art of this album is almost as preposterous as the music on the new album by Hollywood Vampires. The music is as outdated as I am starting to become, were it not that the music is so much fun to listen to. It is simply so well made, that "a splendid time is guaranteed for all", to quote a lyric from another band that is totally outdated, yet still so enormously popular and quoted the text from a 19th century circus poster. Speaking of out of time, baby.

Hollywood Vampires is an all star band consisting of Alice Cooper, Johnny Depp and Joe Perry and an alternating line up behind them of more or of less fame. So what I expect is what I hear: loud guitars and a rough way of singing. This is classic hard rock with loads of melodies. There's no doubt that the gentlemen are having loads of fun. Why otherwise go through all the bother. Each has proven in his own way to be a star.

The result sounds just like it should. A truckload of hardrock that is as totally predictable as it is good. Better. Best. Yes, this word is applicable to the music on Rise. Rockstars do not age if they do not want to. Listening to Rise I almost believe it to be true. Alice Cooper almost sounds as he did when I heard him sing for the first time on 1972's 'School's Out', his first hitsingle in NL. Johnny Depp's voice is much thinner, but he stands his ground. The guitar work by Joe Perry and Depp is simply great. The men playing behind them are very competent. The result is Rise and rise Hollywood Vampires do.