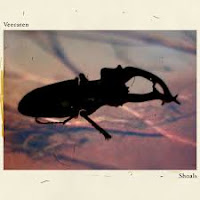 This five song mini album was long in the making and releasing. Lukas Dikker and Johan Kooi decided late in 2014 to start a joint musical project. By bouncing ideas and songs to each other via the email slowly (ideas for) songs came together that culminated in Shoals. An album released in June of 2019.

Together they played all the instruments between them, with one notable exception. The saxophone is by jazz player Eddie Visser, who puts his quite remarkable and, yes, very jazzy stamp on Shoals.

Working for so long on an album, quite often results in an album that is sterile and worked over until all spontaneity has been squeezed out of it. Does Shoals sound like that has happened? In a way, yes. This music does sounds studied and slick at times. There are, at least, two reasons why I'm not concerned about the music on Shoals. The first is that Veecaten is not in the music business to please as a primary reason for its existence. This has everything to do with the second reason I bring up, the elements of estrangement on the verge of derailment of the smoothness that lurks underneath and even up front as in 'Koresand'.

Now I know Lukas Dikker primarily through his (former?) band Luik. 'Owls' is in my opinion the ultimate Snowstar Records record. The blue print for a lot of albums following it. Dikker on that album avoids all confrontation with notes that could even remotely create a hint at upsetting the apple cart of tranquillity. In the title song this serene smoothness is apparent straight away. The link with a current Snowstar Records act like I Am Oak is evident. The long held notes, the soft, modest singing.

The song morphs into 'Coral Express' when the serenity is upset, by sounds, a keyboard playing harsh played notes and Visser's saxophone. The saxophone continues in 'Tide Over' a jazzy song, not unlike I have heard on 'Kairos' by a Polish jazz band. The soft emptiness is discontinued further into the song. When all instruments are allowed to escape their cosiness. 'Tide Over' becomes more experimental where the organ plays fast chords, somehow not exactly falling into the jazz sound. The rest matches alright.

Veecaten, named after a village largely swallowed up by the IJssel over the ages, surprises me in a few ways on Shoals. The mix between the dream pop and the more experimental jazz compositions as well as the estranging elements works truly well. Like in 'Koresand' where, as I already mentioned, more and more elements are introduced creating havoc on the tranquillity it starts out with. The result is a song that is so interesting to follow. Slowly these elements drop away again and a hint of the outset is restored into the song.

With the final song 'How To Drown Without Being Found' the experimental outlook wins in the form of a six minutes plus song containing sound loops, soundscapes, hints at Pink Floyd until the 80 year old Eddie Visser returns to make the most concrete notes of this composition. I expect it to be played on 'Kairos' soon as it fulfils all criteria of the show.

You can buy Shoals here: