Experiments In The Dark. Where We Sleep 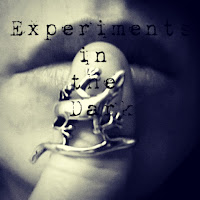 Today we look at three albums deserving full attention but were almost left hanging in the balance. This is the final one for which we turn, after L.A. and Groningen to London.

This is the kind of artwork that I see something different first every time I look at it. Then the lips, the whole mouth, the thumb but mostly the beautiful ornament wrapped around the thumb. Sometimes even the faded lettering. Intriguing artwork makes for an interest to learn more.

Hence I delved into Where We Sleep's EP and found a world of tough alternative rock that opens itself that through the way of playing that seems to keep notes floating around endlessly. Guitars are all over Experiments In The Dark but in front of it all is the dark-toned voice of Beth Rettig. She's all over Where We Sleep's sound; and rightly so. She is this album's queen bee alright.

Where We Sleep is Rettig's project. After her band Blindness folded in 2017, she was at a crossroad in her life. Creativity had to come out of her it seems. The result is a dark-toned, high on energy EP with five songs, that bring the songs of A Fugitive to mind immediately. There's a layer of electronics underneath the surface of all the songs. The drums? Could be real or programmed. Next up are the guitars that are very dominant in most songs. Long held notes or on the verge of exploding into uncontrollable feedback. The result is five songs full of energy with strong melodies. Beth Rettig knows where to find melodies, harmonies and counter melodies. At the same time she can be without compromise. A song like 'Control' is so loud and rough, without losing control for a second. 'Control' is like a steer bucking away, but being worn out by Where We Sleep without a chance to eject the rider as is the natural order of things in rodeo shows. Not here. The EP slips into 'Into The Light' without a second's hesitation handing the reigns to an amazed rodeo assistant after steering the mighty beast back to its cage where it collapses totally spent.

She asked a few friends to help out on lead guitar in three of the songs. All the rest is by her own making. Including the more experimental final and title song. 'Experiments In The Dark' comes close to a non-song. Mostly it is the voice of Beth Rettig that determines what is the song. If anything it shows what a powerful voice she has. In the others she stands her ground firmly, here it is only her voice that determines the result.

When I turn the album on again, the long guitar notes and the shredding guitar bounce of the pattern played by the bass guitar and I know this EP is a formidable one. "I lose myself and I get what I deserve", she sings in 'What I Deserve'. Let's hope that she does on the basis of this great EP.

You can buy Experiments In The Dark here: