BBC 4 Broadcast of The Beatles: Made on Merseyside. A conversation 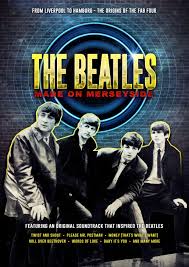 Another conversation today. One that has been lying around for a bit too long, were it not that some additions came in over time.

Mark, 27-3:
Thanks of spotting this, Gary. I think it may also be showing this weekend, Fri and Sat 29/30th. I see Amazon list it here:  B07FS25J2C and whereas John Paul and Ringo get star billing, young George is listed as "supporting actor" along with Pete Best, thus capturing very succinctly a running sore point in the history of the group! Useful if it brings together key people in the early 60s Beatles circle as many are now moving on to the great Beat Club gig in the sky.

Mark, 30-3:
I watched the programme last night. This was a so-so account, not very incisive and no rare clips or revelations. No Beatles taking part - just a couple of old interview clips with Paul - and  I'm always rather wary of Beatles films which feature none of their music - not a single note in 90 minutes (and there are quite few of these films), just fake Beatley background sounds every now and then. This is presumably because Apple, Paul and Ringo declined to back the project and the rights to include music were too costly.

The original drummer Pete Best presents a lot of the eye-witness narrative but he's a very dull character and you can understand why the group cast him aside when they were starting to make an impact - and why they never spoke to him again. Also interviewed were a couple of Quarrymen (John's first proper group) who also seem very ordinary especially when you consider what John, Paul and George achieved individually as creators of the group's impact on music, society, breaking down social barriers, triggering the explosion in youth lifestyle and fashion - all despite the extremely limited and highly conservative media channels available to them in the early 1960s. A film has yet to be made I think of how these local lads, growing up in a post-war regional backwater, achieved and realised the opportunity to do all that - what they listened to, what they read, the art scene they were exposed to - all the factors that stimulated them and transformed their approach to creating music for people to enjoy.

A film hasn't really been made that shows what it was like as they slogged it out for years around the local clubs and halls trying to make a mark and break through. I have a few books which capture the experience of those early days with stories from people who saw them perform before the mania of 1963-64.

The first part of the authorised Anthology film provides quite a good detailed account with previously unseen footage. The film Nowhere Man  about John meeting Paul is very evocative of life in Liverpool at that time - and very well acted - and Backbeat provides a very effective dramatised account of the Hamburg years.

Not entirely to be dismissed as a Beatles cash-in but this Made in Merseyside film didn't add much really to what is already well-known, the interviews were dull, no unseen footage - and having none of their music was a serious deficiency that detracts from it having wider more general appeal.

Mark, 30-3:
Correction: the film about John meeting Paul is called "Nowhere Boy". The title anticipating of course that of the later song. It includes a spine-tingling moment when they first play together.

But as you say, the producers are restricted by the rights holders which makes it very difficult to make something worthwhile…. I suppose the other way to look at this is that to newer generations and those that are not aficionados like yourself this will be fresh and unknown.
It would be interesting to find out just who are the main protagonists and rights holders that are (apparently) stopping definitive documentaries or dramatisations about The Beatles and what their reasoning is behind not (seemingly) allowing what would be very profitable productions?
How is retirement feeling? May take a little while to get used to it… but it will be wonderful!
Looking forward to seeing Todd Rundgren with you next week Mark… I have now got the tickets. I will contact you later on the week and make final arrangements and find a suitable pre-gig restaurant.
Have. Great weekend both! 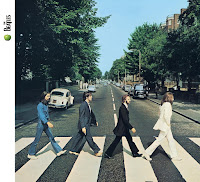 It is a good question who holds the rights to The Beatles' oeuvre. A good guess is the Michael Jackson heirs, but as he died with multi million dollar debts they may have been sold once again.

(I looked it up today. In 2017 Sony ATV, who was in a joint venture with the Jackson estate, bought the family out for $ 750 million.)

I haven't found the time to look at the documentary yet. What you describe, Mark, reminds me of a "family tree" of London bands of the 60s I once saw in a magazine. It contained all sorts of obscure bands with one or two members that did make it. You see them go from band to band, leaving the less talented (or lucky) ones behind until they get into the group that got them to fame and sometimes glory, by meeting the right people at the right time.

It was the same for The Beatles. As teenager they played with friends slowly growing into The Beatles, until just around the recording of the first single recorded for EMI, 'Love Me Do'. It was only then they made the final switch by recruiting a unique drummer, who is totally underrated in my opinion. Who knows what would have happened with Pete Best still on board, but the band would have been less good, so perhaps had missed that one chance because of it. With the drumming - and dry wit- of Ringo Starr it was a match. That Pete Best, as the final one being left behind and in feel so close to world fame, remained embittered all his life, is only too well understood.

The two movies, 'Nowhere Boy' and 'Backbeat' indeed both show a world long gone and are interesting to watch. History is in the making here. The documentary seems to give some first hand commentary and as such can be valuable for the overall picture. It is not long and those voices will be silenced. Who knows what little dot was connected for the true Beatles scholar? For me there's only so much I need to know. Six months from now I'll be at the Ziggo Dome in Amsterdam listening to the integral performance of 'Abbey Road' by The Analogues. Now we're talking.

(A nice p.s. The percussionist of The Analogues lives just down my street I found out last week.)

Here the conversation stopped, until Gary came across the following link:

(A few seconds clip, without sound, from The Beatles live performance on 'Top of the Pops' in the U.K. in 1966.)

Thanks Gary - two or three stills from that performance crop up regularly in books etc but I hadn't realised that the actual recording had been wiped by the BBC. Incredible that such a short fragment of a home recording was identified and kept.

For wholly unrelated amusement - and amazement at the sheer audacity and nerve of the thieves - when going to that BBC link I came across this:
https://www.bbc.co.uk/news/av/uk-northern-ireland-47857633/cctv-shows-digger-ripping-out-dungiven-cash-machine

Gary, 9-4:
I suppose at this point the cash machine had ‘done-giving’?🤣

I get the impression that people are starting to go through their attics and basements looking for more lost gems!

Mark, 30-5
Thanks Gary. A grainy over-the-air fragment of a tv show broadcast over half a century ago is the musicologist's equivalent of an archaeologist's shard of a rare Etruscan vase.

As I always do, I watched the daily nature programme Springwatch broadcast live from the Cairngorms National Park yesterday evening. It is the kind of brilliantly fascinating programme which only a public broadcaster like the BBC can produce. Yesterday the magazine style format of live coverage and recorded features suddenly switched to a clip from Top of the Pops in 1983 featuring Scottish band Orange Juice singing Rip It Up (the BBC in its later wisdom hadn't wiped this one).  Why? Well the storyline was an uplifting one of engagement with and the study of the natural world providing valuable health therapy both physical and psychiatric. The Orange Juice lead singer Edwyn Collins grew up on the east coast of Scotland with a keen interest in ornithology. In 2005 he suffered two major brain haemorrhages causing debilitating aphasia and physical paralysis on his right side. Heartbreaking to witness the impact of that but he can now speak again and can walk with the help of his wife. Key to the therapy for recovery has been to return to the paths along the Scottish cliffs to renew his interest in drawing sea-birds in flight, cruising effortlessly on the updrafts and nesting on the ledges. I remember the band well from John Peel sessions as being up there with the likes of Aztec Camera in the post-punk roster of unpretentious British bands creating finely crafted and highly original songs. So it was great to see Edwyn Collins yesterday back on his feet and speaking in such an inspirational way.

Yes, I saw yesterday’s Spring Watch myself… I must have been distracted at that point because, as you say, there was the TOPs clip, which made me think that the TV channel had spontaneously changed… which had me scrambling for the remote!😆
Never was a fan of Orange Juice (which you would have thought would have been a Northern Irish protestant band?) or that genre, but as you say, it was a touching and inspiring storyline…
Enjoy the Highlands… and a have a wee dram or two for me!