A Fireproof House Of Sunshine. The Hackensaw Boys 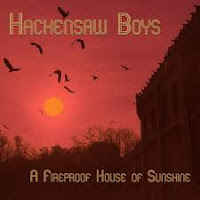 With A Fireproof House Of Sunshine The Hackensaw Boys return to these pages with its new five song EP. The first release since 'Charismo' in 2016. Since then the band has had an almost complete overhaul. Ever since I have ran into the band in 2004 band members have come and gone and sometimes return and leave again. Never as radically as in 2019 though. Only David Sickmen remains of the 2016 (and original) line up. The other members now are Caleb Powers (fiddle), Beau Dodson (drums/charismo) and Chris Stevens (upright bass).

There is another change as well, as all the songs in 2019 come from one person, instead of the many as in 2004's 'Keep It Simple'. David Sickmen is responsible for all five songs. That makes A Fireproof House Of Sunshine a far more one dimensional album than ever before. Gone are the fiddle powered country songs of Ferd Moyse. That fact makes The Hackensaw Boys a totally different band. Is that a bad thing?

No, it is not. In fact I hold David Sickmen in high esteem as a songwriter. The five songs on the new EP are heartfelt songs, where Sickmen soothes the person he is singing to and tries to make life easier all around. In 'Factory Blues' it is he himself who needs help. Personally and as a community member. 'Factory Blues' is a great song and an example how Sickmen is able to diversify his songwriting. Where the first three songs are classic David Sickmen balladry, 'Factory Blues' delves into country a little deeper, while working on the blues in an uptempo kind of way. Caleb Powers' fiddle sounds very traditional. The punky attack of the strings that Ferd Moyse brought to the band is certainly gone.

How this works out live, I can not tell as I missed the band last year when it played here for the first time in the new line up. A first hand account was extremely enthusiastic though. On record I can only say that I'm happy with The Hackensaw Boys' new record. David Sickmen has written five songs that are all interesting in their own right. The power comes into 'Late Night Kitchen' slowly giving the song a spark that makes it a song by this particular band.

It was only after listening to A Fireproof House Of Sunshine once again it dawned on me that I would not call the music on this album bluegrass, let alone the punk element that was an integral element in this band's universe. The Hackensaw Boys have become a more traditional band with this EP. Yes, there's a fiddle, but gone are the banjo, the mandolin and the three, four, five, six voiced harmonies. It is only in the final song that the memory of things gone are touched upon in 'You Act Like My Friend', with a great slide guitar solo as a bonus. A nice ending to the EP.

So wrapping up, yes, this is a totally different band with five new, interesting and good songs. I'm not complaining. Time to see the band live once more.

You can buy A Fireproof House Of Sunshine here: