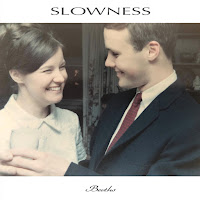 Only six songs, but as they clock around 5.30 minute on average, the album lasts almost as long as Geoff Palmer's 15 song rollercoaster 'Pulling Out All The Stops'. The two albums could not be further apart though.

Slowness plays songs that are long drawn out, played in mid-tempo at best, with vocals that draw out words like played in slow motion. The result is an album that thrives on the little details that move in and out of the sluggish music. It is like wading through muddy water up to the waste. Each step takes tremendous effort.

The intro to single 'Rose' immediately makes me want to sing the "I will be on your side". Neil Young is all over the place in a modern form. This is music as if in a dream where someone wants to escape but is being held back by an unknown source. In an environment that should be familiar but nothing is where it is supposed to be. In 'Rose' the music drags itself forward, yet in such an impressive and expresive way. The drums and bass just go on in their allotted tempo, where the lead guitar slowly but surely is in search of a huge climax. Just like Neil Young once was a master of.

So Slowness, what can be told about the band?, as I had never heard about it before. One thing is for sure. The bandmembers are not in a hurry and they deliberately choose this art form for the new LP. Slowness started in 2008 in San Francisco as a duo, Julie Lynn and Geoffrey Scott. Both are responsible for the music, Scott writes the lyrics. For several years the trio is completed by drummer Christy Davis. Berths is the band's third album, with five years between the last album and Berths. Personal relationships were ended while writing and recording this album, so time will tell what this will do for the band in the near future. It may well be that the darkness that is a main factor on Berths was caused by the loss of love and personal relationships.

I am not familiar with the previous work of Slowness but as it seems to go so often, Berths is an impressive break up album. Berths manages to capture a despondent mood, as if nothing will ever turn out right again. Six songs long Berths wallows in sadness and darkness. This sort of detonates with the soft, angelic singing of Julie Lynn. This is no happy angel, mind, but angelic none the same. Slowness presents the kind of music The Cure did in its early 80s period when each album became darker, '17 Seconds' was followed by 'Faith' and by the ultimate darkness 'Pornography'. There's hope though for Slowness as not long after the world was dancing to the likes of 'In Between Days' and 'Why Can't I Be You'.

On Berths sluggish darkness prevails, where the intro to the first single 'Rose' is most exemplary. A beautiful song, with some great accents. Fans of Low will find their way here, next to those of Dinosaur Sr. I do not recommend listening when feeling glum already. Berths is not going to help here. For those who want to come down a little from a high cloud, the music of Slowness should work quite well.