Even The Bad Times Are Good. The Tremeloes 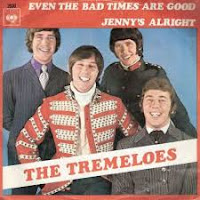 Years ago I wrote a post on just a single song, 'Outside Chance' by The Turtles. Today I do so again, simply because this song is so much fun.

What happened? Recently I went into my former principal record shop in Leiden. When I'm in Leiden owadays I always stop by if possible, to check out the second hand singles and LP section. Yes, nobody wanted 'Tell Me' by The Rolling Stones and also The Golden Earrings are nearer to completion. One of the songs also there was Even The Bad Times Are Good by The Tremeloes. Another band that scored several hits in the second half of the 60s into the 70s. The band was a part of that pop segment of the 60s, where also bands like Dave Dee c.s., Bee Gees, yes, even The Hollies, etc. belonged. Bands that scored true pop hits, so mostly safe despite being very infectuous. Bands that do not belong to my top favourites of the era because of that extreme pop.

So, how long do I know Even The Bad Times Are Good? I am simply not sure. As I have written somewhere before, there are holes in my 60s pop knowledge and they have to do with the fact that my parents did not have a radio in the house for many years, but as I went to stay with a friendly family regularly at that time, even for longer periods of time, I know a lot of the music of the day, because of listening along with what the two elder daughters of this family played on their little transistor radio's. The result is that I know one single by a band very well and may never have heard another one. E.g., having bought a best of Dave Dee, etc. I know 'The Legend of Xanadu' by heart but as far as I'm aware had never heard 'The Wreck Of The Antoinette'. Both were hits in 1968. The previous single of The Tremeloes, 'Silence Is Golden' is definitely 1967 for me. Just like 'Here Comes My Baby'. 'Helule Helule' is a total blank.

Thus I have the idea that Even The Bad Times Are Good falls into one of these gaps. I do remember vividly having it on a tape in the mid 80s and introducing it as a great party track on our dorm parties. I never owned a copy though, until this week.

What I notice is this song is one of the brightest, sunniest, funniest and plain simply good songs in existence. The best remedy to blueness possible. It makes me smile and sing-a-long to instantly. The melody is so upbeat and strong that it is undefeatable. It truly brightens up my day. even when I'm in an extremely good mood already. This effect the song has always had on me. It's one of those songs that I can play ten times in a row and still sing it like I'm playing it for the first time.

So who are The Tremeloes?, as I have no clue really. This is the first song I own by the band (and probably the last). According to Wikipedia the band formed in 1958 as Brian Poole and The Tremoloes. The really good times started when Poole left to go solo, to no success, and the four other members all became lead vocalists, with loads of harmonies. The hits were all penned by others. Often a b-side of another group or an Italian song set to English lyrics. Even The Bad Times Are Good is an original written for The Tremeloes, by Peter Callander and Mitch Murray. It climbed to #4 in the U.K. charts and has a gold certification.

For me this remains extreme fun. It starts out a bit wacky as if a huge party is going on and loads of alcohol consumed. The "la la la la" part announces something special. There's a little The Small Faces in there. In fact they may have nicked this part and the small disturbances all through the song in 'Itchycoo Park' and 'Lazy Sunday'. Listen to the driving drums, the enormously prominent bass guitar and the piano pounding away, the organ laying down a warm foundation. Guitars? If there are any they certainly playing at least third fiddle here. Together they exude such an enormous level of positive energy. Over it either Len 'Chip' Hawkes or Dave Munden sings solo, I don't know. (A clip on You Tube tells all, it's the drummer singing, so it's Munden.) The vocal are what makes the song perfect. "And all I've got to do is run to you", is sung and this goes for the song as much as the girlfriend that is sung about on this hit single. How have I managed to live this long without this great song in my house?