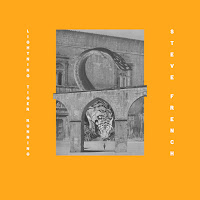 Who is Steve French? Rumours are Dawn's younger brother, but they remain unconfirmed. No, Steve French is a band from Amsterdam that plays extremely pleasant alternative rock songs. The kind that suggest circa 30 years of influences and for connoisseurs there will be no issue at all identifying them.

Having that out of the way, I can concentrate on Lightning Tiger Running as the album deserves all the attention given to it on these pages. Any lover of alternative, ramshackle guitar rock with a singer that sings slightly hesitatingly is at the right address with Steve French. Almost all of the songs have that tingly sound that makes them so delightful to listen to.

Steve French is a trio Cees, Killian en Ruben morphed into one person who in a rainy, grubby Scottish suburb feeling despondent or perhaps worse, does a Von Münchhausen by pulling himself out of the swamp by his own hairs and writes this set of great songs.

Don't get me wrong. Steve French's mood doesn't change much. Things remain glum in outlook, but the therapy of making music certainly works. I bet that Cees, Killian and Ruben, once de-morphed, had some huge smiles on their faces when these songs started to come together.

What I notice in the nine song album is that Steve French is able to create a few moods. First there is the ramshackle vagueness. Secondly, very direct songs. Finally there is an alternative ballad, just one man and one guitar, no matter how short the song is. Through mixing the song sequence just right, these mood changes change my perception of the album, giving me the feeling that the album not only seems longer than it actually is, but certainly makes the album better as well. The balance is simply right. Now the latter is a deciding factor on my route to give you a positive advice on the album.

Having listened to Lightning Tiger Running several times now, the conclusion is that Steve French adds its own blend to a well known segment of rock music. Although I said I would refrain from naming others, I can't refrain from mentioning Boudewijn de Groot. The verse of 'Country Bleed' could have been a De Groot song over 50 years ago. The grunge like guitar explosion in the chorus was unimaginable then though. It only underscores how diverse Lightning Tiger Running is.