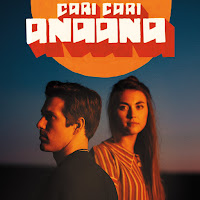 Every once in a very exclusive while the first notes of an album kindles a flame that, I simply feel in every fibre of my body, will grow into a blaze. That is exactly what happened to me recently when I put on Anaana for the first time. With every note that followed I was on fire some more until at the dying seconds of Anaana I was ablaze totally, no longer extinguishable.

Yes, many, many sounds on Anaana have been heard and played before, but seldom in all the right places like Cari Cari plays them. The listener will recognise The xx here. Certainly, without The xx no Cari Cari. Blood Red Shoes, surf rock and Dick Dale, John Lee Hooker, even The Shadows can be mentioned and many influences more. What counts is what this duo does with these influences and that is to come up with a superior album. An album aglow with great sounds.

In fact my very first thought listening to the opening song 'Summer Sun', was, this is what The Walkabouts could have sounded like had it released its first album 30 years later than the band did. Coincidence has it Chris Eckman releases a new album on the same day as Cari Cari. That review will have to wait though. Youth takes precedence here I'm afraid. The male/female singing is reminiscent of Chris and Carla (Torgerson) and so is the Americana part in the influences of Cari Cari. For the rest similarities stop as Anaana is such a bare album, full of reverbs.

Cari Cari is Stephanie Louise Widmer and Alexander Köck. They have released an EP in 2014 ('Amerippindunkler') and a single in 2017 ('Nothing's Older Than Yesterday'). Come November 2018 and finally the debut album is there. The result of touring, travelling and living on different continents. Widmer drums, Köck plays the guitar, both sing. What is the hardest to believe is that this at heart is an Austrian duo. The sound is so, well, western, to give it a name.

Hearing is believing where Cari Cari is concerned. The band is able to create intense moods, like The xx, but is melodically so much better and in styles covered so much more diverse than its London colleagues. Besides the empty moody atmospheres Cari Cari is able to play with many moods and styles, without ever losing control of its album as a whole. 'Dark Was The Night Cold Was The Ground' is an ultimate The Walkabouts kind of song, where 'Mapache' is a surf kind of The Shadows-Dick Dale hybrid and 'Summer Sun' pure vintage The xx. Ad a fantastic ballad that closes Anaana, 'Do Not Go Gentle Into That Good Night or the John Lee Hooker stomping 'Mechikko', where Köck is going to kill himself, no less, and it becomes clear how eclectic Anaana is. The good, better, best part is that Cari Cari excels in all styles. It comes up with something far superior or at the level of the best The Walkabouts albums with its debut.

Having taken it all in, it looks very much the case I am listening to a five star album. Something very rare. Does it compare to my all time favourites? That is so hard to answer. 'The Dark Side Of The Moon' and 'Wish You Were Here' are so different and with me for over 40 years. Fact is that Anaana has made a direct and deep impact on me, like not many records do in this fashion. 'Franz Ferdinand' and 'Whatever People Say I Am, That's What I'm Not' are two more recent albums with such an impact. So Anaana is contending in this league for now. The coming years will tell more. For now: WHAT A RECORD!!!!!!