A Room To Store Happiness. Queen of the Meadow 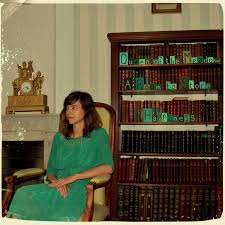 Listening to A Room To Store Happiness and especially at the start of the album 'Withdrawn', one word springs up in my mind: pastoral. In my mind I see queen Marie-Antoinette of France and her entourage of ladies in waiting enjoying their little Arcadia in the back of the huge garden in Versailles. Sitting in the shed, with sheep and lambs all around them, making garlands of the spring flowers and living their privileged lives, for as long as it would last. Withdrawn indeed. It is not hard to imagine Queen of the Meadow sitting in her corner of the shed or veranda softly playing her guitar and singing, with the queen and ladies softly singing along.

Fast forward to 2018, with a diversion to the 70s Polaroid sort of photo on the artwork of the album. A Room To Store Happiness is Queen of The Meadow's second album released on Tiny Room Records. 'Aligned With Juniper' (2016) was in fact my introduction to Stefan Breuer's label.

Again folk is all the clock is ticking here. The music is ever so slow and, yes, pastoral. The only thing breaking through this rest is the double tracked voice of Helen Ferguson. She is omnipresent on A Room To Store Happiness this way. Having a fairly thin voice, the effect is one of strength. Around her the acoustic guitar is the foremost instrument. From there others can join. A song is slowly fleshed out, either through harmonising beyond the double tracking and other instruments, strings or a light form of percussion. Just listen to 'Ashes Adèle', a piano based song. There are Helens everywhere, while a church organ chimes in ever so softly, as do strings. The song becomes bigger the whole time, while remaining its modest self. Beauty is the right word here.

Listening more closely to the album, I notice that small pop elements are allowed to join the folk music. A few chord changes and melodies that could have made a pop song. Allowing in a little extra light on the spring meadow.

A Room To Store Happiness is an album that has little, perhaps even nothing to do with 2018. It is an album that could have been made any time over the past centuries (if they had albums, electrical instruments, etc. that is). It is the intention that counts. Just like Modern Stories' album from 2017, 'Swell To Great', this albums has an atmosphere from days long gone by. While at the same time it has a little recalcitrance like Gretchen Lohse is so good in on her album 'Primal Rumble'. Where 'Empty Room' could be a new song by Elenne May. Queen of the Meadow holds more than just pastoral folk music. The thing is that I have to remind myself of this fact as the primary memory of the album is always that.

And exactly that is what makes A Room To Store Happiness such an interesting album to listen to, again and again. I am always surprised by the changes and the quality coming with these changes. Yes, once again a spot on release by Tiny Room Records.

You can listen to and buy A Room To Store Happiness here: