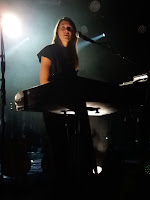 Every time I see Sophie Hunger play live she surprises me. Not that I forget how good she is, no, far from, it is because of how much better she seems to have become. Sophie Hunger is an artist I wish for her to perform in multi million dollar generating arena venues but prefer to watch so incredibly up close that I can see her smile, notice her living her music. Up to now I am the winner, but not being a selfish person, wish her that breakthrough. Why?

Simply because her music is so unbelievably good. Whether playing alone on her acoustic guitar or piano or with the band going all out in a sonic storm, each song is contained in a unique universe. Ask me to compare Ms. Hunger's music with somebody else's and I come up empty. The mood, the mood swings, the language alternating between English, German, French and Swiss-German, the instrumentation all sign Sophie Hunger. (Well there is this NL band called Elenne May. It probably is more than a coincidence that I ran into the band's bass player at this particular show. A tip for the next tour's support act?)

With 'Molecules', her latest album, Sophie Hunger has taken a new leash on music (read our review here: https://wonomagazine.blogspot.com/2018/08/molecules-sophie-hunger.html). This translated in a new band, only keyboard and flügelhorn player Alexi remained and in a whole stack of keyboards on the stage. The one of Sophie Hunger resting on piece of art it seemed, like the iron came straight out of a smithy. Traditional keyboards, a bass synth played by the drummer while drumming as well and a range of keyboards/synthesizers that produces beats, dark sounds, twisted warps and what not. Dark atmospheres were at times created in which the songs of Ms. Hunger dwelled extremely well. 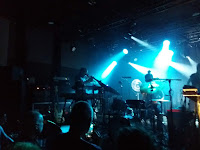 The incredible part is that this whole makeover has taken nothing away from what a Sophie Hunger song is. Instantly recognisable and full of that mystic, jazzy, alternative pop and chanson balladry feel that permeates most of her songs. 'Molecules' stood up very well to the host of songs from 'Supermoon', her previous album, that were played as well. My album of 2015 no less was honoured with a lot of songs. Without the guitar wizzardry that was part of the album and shows, with the new synth treatment. They all stood up to this new test.

The final song of the set was a new one "Hang Hang Hang". A bit of a lark and a laugh. Extremely fast chord changes, impossible to sing to but done so anyway. I was remembered of crying by a young child that at the same time is trying to explain what happened or put blame on someone, all the while gasping for air: "I-I-I-I-I-I-I-I-I-I-I-I-I". If I remember correctly Sophie sang something like "How do I ever get over you?", with I-I-I-... part in between and bursting out laughing herself. It seems like that question has been answered since writing the song. It all ended with the now famous one minute or more of perfect silence. The band stops playing and then? Being a veteran I did not spoil the party. That long, long silence remains impressive and tells all about how enraptured people are by the music of this Swiss artist. 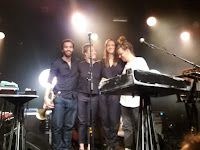 My question was how will the new music translate on stage? That answer was provided: in Sophie Hunger style. With a laugh and a lot of serious music making. This lady is so good and her band, again, superior. A fantastic drummer, all great harmony singers, the keyboards doing all the work and in the middle this modest, smiling, sometimes naughty singer, guitar and piano playing star. For one hour and thirty minutes, du war die ganze Welt, Sophie. You left people in awe, quite clearly, all around me (not excluding myself). Most had only one question left after the show: Where is the merchandise? A lot of money was not collected was my impression.

Dewey was the support act and remained a bit of a mystery to me. Electronics, pre fab beats all coming out of a small synthesizer. Sometimes irritating, sometimes just right. Mood changes all over the place and not all as swift as might be expected. I do not really know what to make of this English singer. Certainly sympathetic, but perhaps not ready (yet) for this stage? The short show did have its moments though. I'll stop commenting here.