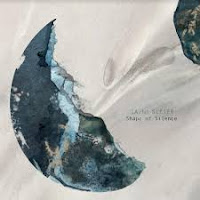 Soft and dreamy, that is the right description to start this review. Saint Sister prefers its laundry to be soft as silk when it comes out of the dryer. I can see the ugly little, smiling bear coming with the add in this country in my mind's eye.

Saint Sister is a duo from Ireland. Shape Of Silence is Gemma Doherty and Morgan MacIntyre's first album, after releasing several singles after the inception of Saint Sister.

In its music Saint Sister starts with folk. The classic British variety that is. Doherty & MacIntyre sing duets the whole of the time. Very much like Worry Dolls and The Secret Sisters do or Helen Ferguson does with her own voice(s). There is a main difference with the first two. Saint Sister does not do spectacular harmonising. This is far more in unison than diverging and coming back together. This makes the songs in Shape Of Silence serious to extremely serious. Not less attractive. Far from.

It is from here the journey called Shape Of Silence starts. Why? The duo leaves the British folk behind as soon as the music itself is concerned. If anything, Saint Sister is not afraid of (dark) electronics. I am not a fan of the triphop that was big somewhere over 20 years ago, think Massive (Attack). The sounds of that huge hit with the baby in the womb video is all over this album. Songs carried by electronic soundscapes with some melodies escaping it here and there.

Now I have no way of telling which came first, the sounds or the songs. If the former the two ladies filled in the space on top of the sounds and soft beats. If the latter the acoustic songs were stripped away ruthlessly to be replaced by the modern world. And this is a huge difference with modern folk music which lets in modernities in only to support the folk. Here samples of spoken words, slow beats, atmospherics, voice treatments, are all fair game. The recently reviewed album of Queen of the Meadow (Helen Ferguson) is the antithesis, in everything, of Shape Of Silence. Yet both albums manage to touch, though in various ways.

Not all is so modern here. My one Enya album, the one with 'Orinico Flow' on it, shines though here and there. The fretless bass in 'Half awake' sounds like Fernando Saunders' bass on Lou Reed's 1980s albums. So there are enough handles to find my way into Shape Of Silence.

What wins me over in the end is the beauty Saint Sister has on offer. This album holds the love of Gemma Doherty and Morgan MacIntyre for their music. It is an delight to listen to, an album that immediately sets my mind on this music. With no need to think of anything else.