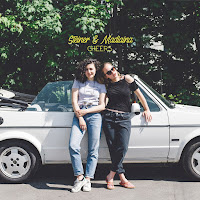 Two young, self-assured and slightly alternative looking young women pose in front of an older model cabriolet. The Thelma & Louise of 2018 ready to burn rubber and run for it? No, Steiner & Madlaina are ready to take on the world, head first, on the basis of an oh so nice, alternative pop and indie rock album. Cheers! is the sort of album that I can play on any moment of the day. It cheers me up immediately.

Steiner & Madlaina are Nora Steiner and Madlaina Pollina from Switzerland. (And  that explains my Sophie Hunger association when the duo sings in English.) Cheers! is the duos first album, after releasing an EP in 2017, called 'Speak'. Like Ms. Hunger Steiner & Madlaina sing in several languages, German, English and Schweitzer Deutsch, that nearly incomprehensible form of German that for Dutch ears regularly is too much to process.

What Cheers! firstly signifies for me personally is the huge lust for life the album shows. The album is full of summer, like the sleeve shows. The energy is immense. The fun of creating these songs and playing them the way they are played all show that the two women are extremely proud of  their songs. And right they are to be. This does not mean that all is well in the universe of Steiner & Madlaiana. Perhaps far from even. It does mean that the duo has the strength to put negative impressions into strong compositions and lyrics. Just bare with me here.

In how far 'Riot' is autobiographic is hard to tell from the outside, just read these lyrics: "Hey Momma, hi daddy, do you remember me ... I am the bad seed, I know I am, but I am not sorry". It does tell something about the desire to become an artist and not a doctor, lawyer or nurse, doesn't it?, but also on the pride for what has been achieved to date. Leaving it all behind to achieve the dream. What every great artist has to do in one way or another. Everything moves in front of the muse. As such, this song in the middle of Cheers! is a key song for Steiner & Madlaina.

Musically I have already mentioned Sophie Hunger, but I am reminded often of Dutch band Elenne May as soon as the tempo goes down somewhat. In general singer-songwriters have been an influence as this duo is full of stories. The music also follows in a long tradition of German (and English) language bands. 'Skandal Im Sperbezirk' was extremely exuberant and 'Kristallnacht' very rocked up, yet 'Das Schöne Leben' does not stay that far behind. It is the melancholy mood that makes it somewhat different (and the mandolin/bouzouki sound), not the going out on the town feeling of the song. At the same Nancy Sinatra and Susanna Hoffs can be mentioned in a mix with Lily Allen and Lana del Rey. In 'Reckless Love' the dreamy quality of these three singers come together and are blended into an icy love song.

Steiner & Madlaina have several musical faces, that all have its own distinctive qualities. The album kicks off with a mix of seriousness and an all out exuberant, happiness that gives nothing away of the really serious side of the duo. There is no fear of soft, empty, questioning songs and neither to then let them explode. 'Gross Geträumt' is one of the winners on Cheers!. That aside, the voices of the two both are winners and compliment as well as challenge one another. Another huge plus for the album.

It seems that after Sophie Hunger I have another act from Switzerland that is going to be extremely interesting to follow in the coming years. If anything Cheers! is an extremely successful debut album. Together with Shame's 'Songs Of Praise' the best of 2018.

You can buy Cheers! here: