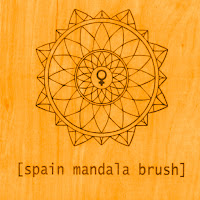 Not too long ago, I wrote about the live album Spain released, consisting of recordings of its weekly stints in a L.A. venue. Evenings that were used to experiment and work with guests, just to find out what would happen on such an evening. I concluded that I would surely have liked to have been present on one of these nights. (Read on here: http://wonomagazine.blogspot.com/2017/06/live-at-lovesong-spain.html.)

It seems Spain has taken that attitude and approach with it into the studio. I have a lot harder time to digest what is on offer now that I'm listening to a studio recording. It is hard to discern why that is, but I will try my best.

Up front I'm going to start simply by stating that musically Mandala Brush is fine. The record seems well composed, the mix of the sound and instruments is excellent. What is harder, is that Josh Haden seems to exert his voice more. He sounds strained here and there, which is not always pleasant to listen to. It is a confrontation of sorts. Right in the beginning in 'Maya In The Summer' Haden is in my face, staring me down, with me losing effortlessly. Musically the song just continues and then some more. It is one long streak of repeated notes, with minor variations in the vocals. Over this instruments play patterns of notes, while the drums and bass pound ever onwards.

The song lasts about seven minutes, reflecting the jams at the Lovesong. How far can we take one basic musical given? Far, as 'Maya In The Summer' is a hypnotic song. Confrontational, certainly, but also good and somehow not one second too long.

The mood becomes more relaxed in the beautiful 'Sugarkane'. A song like a song can, perhaps should be. Melodically strong, great singing and harmonising (either his sister Petra or Tania) with a clear beginning and ending. Brought in a mix like this, Mandela Brush grows, substantially.

The third song is psychedelic heaven and transcendental meditation in one. Bells and other in kind percussion flows over the floating music. Haden just chants his aahhs. Danny Frenkel's snare rolls, his cymbals are very present. 'Rooster Cogburn' is released about 50 years too late. Jefferson Airplane at its most experimental comes by here. The shouted "No man is an island. He's a peninsula", is all that is missing here. At the same time Kenny Lyon (guitar) and Shon Sullivan (organ) play a great role and Haden shows he knows his Jack Casidy. It is not hard to warm to this psychedelic outing. 'Rooster Cogburn' has nothing to do with the psychedelic revival of the past 10 years but everything with the experimental 60s. Eight minutes is nothing and over before I know it.

The change to the country of 'You Bring Me Up' is unexpected and quite sudden. Again I am enjoying the clear sound of Mandala Brush and the ladies Haden singing their oohhss in the background. Not really my style of music, but certainly alright in its sort.

Back to experimentation in the studio. Horns and woodwork comes in and the violin and cello of Haden's sisters. 'Tangerine' is a stretched composition. All notes are long drawn, the music is far from in a hurry, while within that point of rest there is a listlessness, an unrest. It is this contradiction that makes 'Tangerine' so interesting to listen to. Again, Josh Haden's voice is in search of its limits. Yes, it fits the composition totally, but that does not always make it pleasant to listen to. Again 7 minutes is nothing here.

Further on Mandela Brush melancholy is researched thoroughly with a French touch or a soft pop touch with a muted trumpet in the beautiful intro to the song ('Folkstone Kent'). In 'Laurel Clementine' Neil Young is saluted the Spain way where again melancholy is clearly in view. What a song! Eastern sounds are introduced. Not my cup of tea, but we are experimenting here. Despite the composition westernising midway through, Spain has lost me long before 14 something minutes are over. AAAARRRGGGHHHH!!!!

It would have been better to end the album with 'God Is Love'. Then I could just switch it off. Now 'The Coming Of The Lord' follows. Again a great song with a beautiful trumpet. TMGS territory (The new album, 'Ain't No Place' is due on the 19 October, finally!) The real end is 'Amorphous' that starts with Haden's bass guitar only. Slowly the song develops in a Pink Floyd way.

So, yes, Spain does not make it easy on its listener. Mandela Brush is an album in which Josh Haden has tried out his band to the extremes and not be bound by conventions. Some experiments go over the top, other succeed and in the middle are some fantastic songs. All in all Mandela Brush shows that this way of working paid off for Spain. In a grand fashion. The musicians were all willing to go the whole way and play an idea out to all its corners and back. The result is a superb album.

You can buy Mandela Brush here: