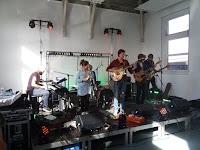 200 Years Scheveningen, weeks of festivities and 200 bands, one of which was The LVE from Antwerp about to release its new mini album on the Dutch label Gentlemen Recordings (28 October).

Traffic jams, delays, it all made that a fairly short trip lasted for more than three hours with only a 45 minute slot to play. Ray Davies had to cut his setlist by half for such a reason in 2006 at the Arrow Classic Rock festival and so in the end had The LVE as so many bands had to follow after it.

Before the show someone with a bottle of champagne stepped forward with a stack of cd in his other hand. The band was presented the first copies of its new album and I was able to shoot some pictures and received one of the albums as well. Quite an honour to receive the 7th copy distributed!

When finally everything was working I knew within a few seconds why I like this band so much. The music sounds so delicate, yet is so firm and well balanced. Somehow no one plays anything that does not need playing. And that is an accomplishment with five musicians on stage. Keyboards, two guitars, bass and drums. Each feels comfortable in giving the other musician room to play the few notes that stand out in turns. Next to that the pleasure of all shines through when the song is in full swing. If there is an ego involved in The LVE it is one ego only, the band, the collective ego.

Over the music singers Gerrit and Sara harmonise the whole time, assisted by Thomas, Rienk and Bert in the right places. The melancholy seeping through the voices of the two lead singers defines The LVE sound. There's always a sense of loss, acknowledging the present and true hope for a better future mixed in there, making the singing irresistible at my end. 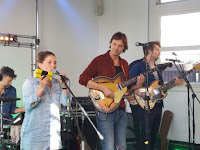 The new songs from the forthcoming album were played. I will refrain from writing as I do not want to give away too much as yet, except that there's an unbeatable good track on it, 'Sad Sad Song'.

In between my favourite song by The LVE was played and one of my favourite songs ever. a song I can play 10 times in a row, without it ever losing anything of its power and mystery. 'Love When You Don't Want It' it is called and if you haven't heard yet, go out and do so. Now! The shivers went down my spine and my eyes got that prickly sensation, the way only the best music effects me, before I settled in and started to sing along ever so softly. Thank you for this beautiful song.