Muckus Maximus. Muck and the Mires 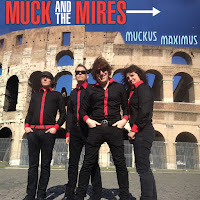 It keeps amazing me how the 60s remain a huge influence on musicians. For young musicians of let's say 20 years of age, the 60s were swinging 30 years and more before they were born. Perhaps not even their parents were around at the time.

Yet Muck and The Mires are playing U.S. garage rock with abandon. Super melodies with staccato rhythms and a great little Farfisa organ in the middle of songs.

On Muckus Maximus the band kicks off with 'Break It All'. A song leaving no doubt where the intentions of this band are concerned. A fast rock and roll shuffle sets the pace of this four song E.P. It is 1964 musically just after The Beatles have conquered the U.S. with 'I Want To Hold Your Hand'. Every youngster with an inch or two of imagination, a little creativity and some rebelliousness took to their parents' garage and started to make music and grow their hair. It is this atmosphere Muck and The Mires captures fantastically on 'Break It All'.

The second song 'Good Enough' jumps to the late 70s when songs like 'My Sharona', 'Hanging On The Telephone' and 'What I Like About You' were such nice hits. All influenced hugely by the 60s garage rock of course with a little punky attitude to boot. Again the song delivers and convinces. This is rock and roll as it is supposed to sound.

Muck and The Mires is around a little bit longer and touring the world for nearly 15 years today. Hailing from Boston, the band first gained attention by winning a Steve Van Zandt garage rock contest in 2004. In 2018 this 10" vinyl EP is released with nothing but winners on it. In 1964-65 each song might have been a hit. Nowadays it will only reach connoisseurs of vintage garage rock and proto punk. With further songs like '#Loneliness' and 'Too Soon To Fall In Love' there is nothing left to convince. Muckus Maximus is a winner of an EP. Had the songs been released over 50 years ago, be sure to have found them on the famous 'Nuggets' box set.

You can listen to and buy Muckus Maximus here: