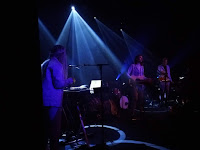 Sophie Winterson opened for Amber Arcades at the Sugar Factory. She proved to be a perfect support act this evening. A stage full of electronic devices, a snare drum, one cymbal, one keyboard, laptops, one guitar and one bass. So it was a kind of surprise Ms. Winterson just opened with a triple humbuckered Fender guitar. On her voice so much delay was added, words were repeated over and over the moment the singing stopped. Where her guitar was concerned there isn't a bathroom in the world big enough to create that much reverb. Still it was an intimate start.

Her two companions stood at the ready on the side of the stage facing each other. All three dressed in the same designed/made suit. Not being familiar with any of the songs, my guess being that they will mostly be from her forthcoming LP 'Sophia Electric' (out on 2 November). Most songs have an icy quality and, yes, are electronically based. Beats, bleeps and blops are created driving each song forward, over which Sofie Winterson sings with her delicate, modest voice.

The melody mostly comes from the singing, supported by the keyboard. The big surprises are when the electronic beats are taken over by the snare, electronic bass drum and the cymbal or when Winterson picked up her bass during a song. The result was a great mix between two worlds that made the show very much come alive. 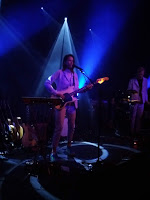 It is harder to enjoy a show without knowing a single song. Those shows really come down to the music and the performance. As I wasn't distracted for one moment during the half hour Sofie Winterson and band played says enough. There was no show element to speak of but more than enough to see. Where is this sound or even melody coming from? A melody produced by what looks like a drum computer pad, played with a drumstick? Yes, surprisingly it was. Other melodies and beats seemed to be pre canned, at least, I could not find someone playing it. What remained was my feeling that the songs were more than alright, so I will reconsider listening to 'Electric Sophie'. Watch these pages and learn more if and when the record has the same impact as the show.

As a final comment. I think I have seen Sofie Winterson play once before, but hardly have any recollection of the support show. In my mind it was still at the LVC in Leiden, in the months before it closed. Also a girl with an acoustic guitar comes to mind. I haven't placed the memory yet. If correct, some growth is shown here. And that word brings me back to the circle started with my review of Amber Arcades' show.