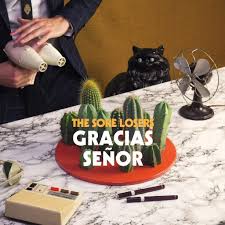 Please take a look at the cover of Gracias Señor. It does pose a picture begging the question whether to take this all seriously. Does the same go for the music of The Sore Losers?

The album kicks off with 'A Little More'. Everything between The Tragically Hip and The Black Crowes come by immediately in my mind. All bands with The up front and two words after that The. Guitar driven songs in the mostly alternative, some southern rock segment. 'All In A Day's Work' may be more alternative inclined, yet again a song that is more than alright.

The Sore Losers is a band from Belgium, started in 2009 with now four albums to its name. As all others passed me by, I do not have to compare. What I'm hearing is links to another Belgian act, Admiral Freebee. When Tom van Laere decides to rock out that is. There also are nods to Britpop bands like Supergrass, without the tongue in cheek spunk of Gaz Coombes' delivery.

'Eyes On The Prize' is such a song. The little riff throughout the song is typically Supergrass. Yet the song is so much more serious. There's just not much to laugh here. Which is all compensated by the great delivery of the climax of the song. Even more guitars join Jan Straetemans' singing. Basically here the mystery part of The Sore Losers is presented. The songs may all be serious, there's nothing to complain as far as the intentions of the band are concerned. Each song has its intrinsic strengths and a few surprises in the execution. The band was not happy with one or two findings musically. Where an extra guitar line could be found within a song's arrangement, you can rest assured. The Sore Losers will have found it.

Vocally the band in more one dimensional. Harmonies is not something it bothers with. A straight vocal delivery does the trick. Straetemans may have double tracked his voice, but things remain there. The singing itself it just as straight forward.

Further on in the album the 70s get through more on the album as influences. Faces, Led Zeppelin e.g. are bands The Sore Losers' members have found in the record collection of their parents or uncles. Some of them must have been classic hardrockers in their day. And why not? Some great music was made at the time.

All these influences shine through, making The Sore Losers not the most original band on this planet. It hasn't the intention to be that. It does have the intention to write and play some classic rock influenced originals. With the solid foundation of Kevin Maenen's bass and Alessio di Turi's drums, Straetemans' and Cedric Maes' guitars can rock all over the place. And they do. Add a keyboard in the album's totally succeeded ballad 'Where Are You?' and the picture is about ready. Mission accomplished.